Next month I will have lived outside of the US for 6 years. I can safely say up until Friday, I had never eaten in the street before. A mom with food poisoning is not a pretty picture. Guapo took risks (and occasionally suffered the consequences) eating hot dogs, of all things, off the street in Venezuela. But, after being laid out flat for 3 days from eating at a ward Father's Day party in Small Town, Mexico, he has been a whole lot more careful.

Ever since we found out that we will be leaving Mexico at the end of this month, I have been craving Mexican food. The three years prior, I didn't much care for it. I always wanted safe, American-style Mexican food. But now I want the real thing.

Here's a pretty picture of some typical Mexican food: Queso fundido- they put cheese in a bowl and melt it over the grill, sometimes with mushrooms or meat of some sort-it is yummy. And the flat green items are "nopal", which would be cactus. I still am not quite loving the cactus, but it is really good for you. And of course the chiles: 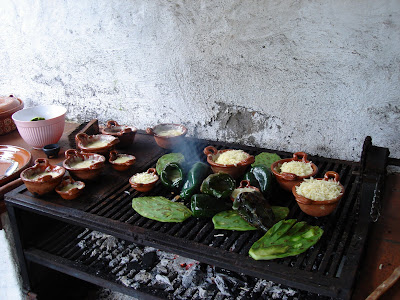 To satisfy my craving, we have been frequenting the "safe" taco joint in the mall nearest us. Our favorite type of taco here is called a "gringa" it has some kind of meat that comes off of a spit that's been there for who knows how long (I try not to think about it), cilantro, onions, cheese and pineapple.

So here are a bunch of "gringos" eating "gringas": 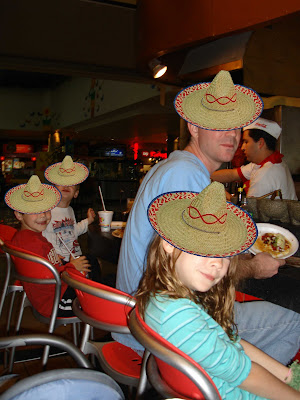 Friday, Guapo and I were out and about doing some last minute errands and we were close to a "reputable" (according to our friends) street taco stand; I decided to take my chances and finally try the real McCoy.

All was well; we were sitting on buckets out on the side of the busy street, eating our tasty tacos, tying to fit in but getting stared at like crazy. Then, near the end of our culinary experience, Guapo and I each found a hair embedded in the taco meat.

It still makes me sick to think of it. I spent all day certain that I was feeling rumbling in my tummy that would lead to a very unpleasant night. But, happily, the yummy, hair-filled tacos didn't make me sick. Still don't think I'll be going back.

One last word on tacos: 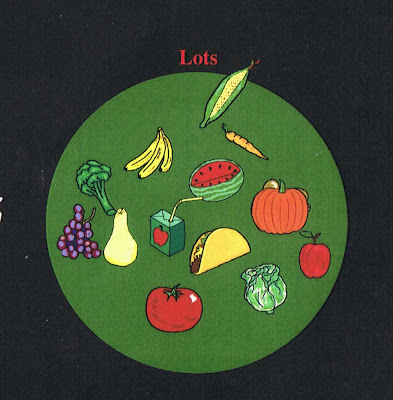 Yep. Fruits, veggies and, you got it, tacos.

We must be in Mexico!