Guapo and I have been married almost 13 years now. We have lived in 3 American states, 4 countries, 3 houses, and 6 apartments. The average time we spend in any one place has been 23.67 months. The shortest time we have stayed in one place was Houma, Louisiana (10 months), and the longest has been in Caracas, Venezuela (2 years, 8 months) and even there we lived in 2 different apartments. This blog, which I have now had for just over 3 years, has covered our time in 3 different places (Small Town, Mexico, Mexico City and here in Brazil).

I, in my humble opinion, am an expert mover. It doesn't freak me out-from most places we've lived I've looked forward to it (Washington, DC being the one exception. Well, and Caracas after I visited Small Town). And, since we've now been here in Brazil for 21 months- we are quickly approaching the 23.67 month average time and that means I am gearing up for a move.

But, we recently found out we are staying put for a while longer which I'm fine with-the kids are happy, and it's not a bad place to live.

However. My subconscious mind doesn't care that we're staying-it's entered into my Hyper-Organizational Mode, where I usually fixating on one or two areas and work feverishly until it's done.

Digitizing, organizing, and storing all of our photos.

Sounds easy right? I mean, we've had a digital camera for the last 10 years or so-so it can't be that many photos to take care of. Wrong. Pre-marriage college days, wedding pictures, Margarita's birth and first year, professional photos (some of which are in frames), photos that people have given me-both actual photos and emails with photos that I have been saving in my inbox for YEARS! Yikes!!!

And the scanning them-ugggh-so boring and time consuming. Whereas before I wasn't that concerned with backing everything up-now that I've invested a couple of weeks of my life to this project I have two separate external hard drives, I'm backing them up to an online storage site (which took an entire week of uploading!), and now I'm considering also backing them all up on dvds. Why? That's how I am when I'm obsessing-overkill!

So, I'm still around, just a little preoccupied. I need to blog about Margarita's birthday, Pedro (my just turned 2 year old) correctly using the phrase, "What the heck?" and a few other things-so hopefully (for my blog's sake, and Guapo's sake) I'll be done with my photo craze in a few days.

...that's what I get for temporarily relinquishing power of my camera to Julio (8 years old) on a recent class field trip to a local farm. 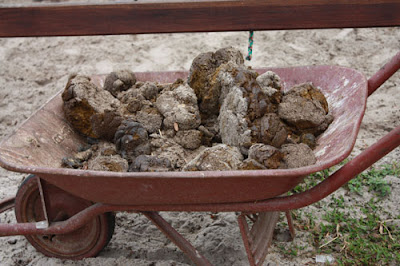 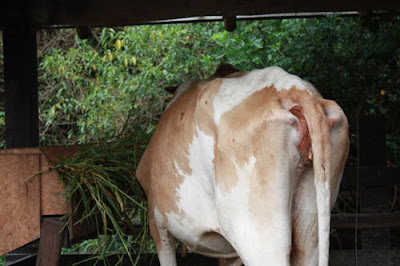 I, on the other hand, took lots of cute pictures of bunnies: 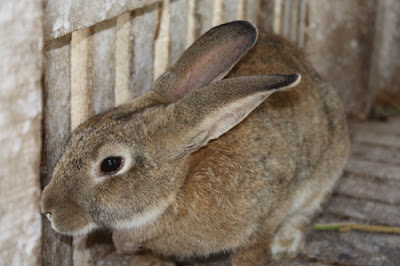 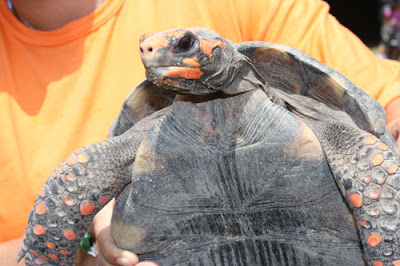 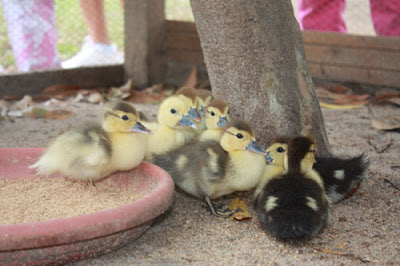 Boys and girls are just wired differently, don't you think?

No, it's not that by car has been broken down the last two weeks and that the used replacement piece, if it even works in my car, is going to cost us over $1,000.00 USD...

Or that after waiting 3 annoying weeks and shelling out hundreds of dollars to fix the washing machine, it's doing the exact.same.thing again...

Or that Guapo not only beat my W11 Fit soccer score, but he got a perfect score-what's the point of even playing anymore???

Friday I put Pedro down for his nap as normal. I went to chill out in my room for a while before all the big kids got home. I had his monitor on and I could here him singing and babbling-totally normal. Then it goes silent-sleeping right?

A bit later he comes into my room with the Wii remote, "Want to play W11 Fit?" (I swear we're not addicts)

What the heck? "How annoying," I think to myself, "the maid got him up because she heard him talking." Humph.

So, I take him back downstairs to put him in bed and to talk to the maid about not getting him up. But- she's not there. She left. Could it be that she got Pedro up and then left? No, unfortunately, I don't think that's what's happened. She's not like that.

So, praying for the best but fearing the worst, I put Pedro back into his crib and wait...

I don't have to wait long. Two minutes later he comes blazing out of his room, "Hi mom!"

After several more attempts at bedding him, he finally gave up on escaping his room-but not his bed-this is what I found: 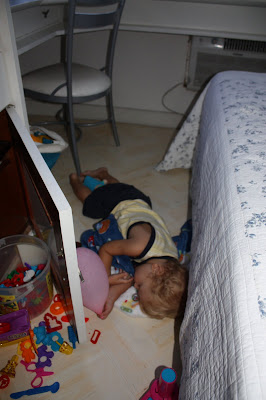 When Guapo got home that night, Pedro very proudly demonstrated his new skill to him.

What am I going to do?

Would there be a problem with sticking him in a large dog carrier for the night? He likes cages. Here he is garage sale-ing last summer-we could not get him out of this cage. 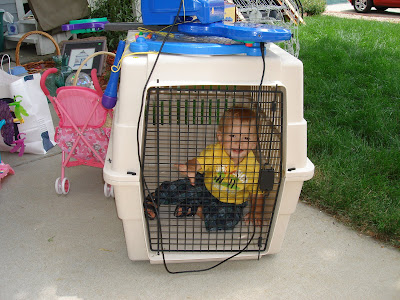 My mom almost bought it for him just because he loved it so much. If I got a really big one, a little mattress, a pillow and his blanket-it could work, right?

Or maybe a lid for the crib? Why don't they make those?

But seriously (read: I would never really put Pedro in a cage) (ummmm, unless, of course, it was socially acceptable), this phase is one of my least favorites, second only to the horror that is Potty Training.

Any advice? Suggestions? Words of encouragement?

I hate to write a new post, I just love that little picture of Pedro so much.

But, alas, it's his own fault that I have to replace his cute little face with a story about him.

We were hanging out in the family room yesterday-he was watching something and I was sitting on the couch with my laptop. He says to me, "I wan play Wii Fit" which means he wants me to play on the Wii Fit while he dictates which games I play-he loves the soccer one (and I might add here, I hold the family record in this game. And in skiing-beginner and advanced thank you very much!) and the bubble game (I really, really suck at this game).

He didn't like that answer so he comes over and hits me on the leg. Normally when he hits, he has to go into his crib for a time out. But, we were upstairs (his room is downstairs), and I was working on something really important (ummmm, yeah, sure I was) so I pretend not to notice.

He proceeds to get directly into my line of vision and hits me on the arm. I can't pretend I missed that one-and he knows it. As I sat there for a second trying to convince myself consistency really is important he says to me, "I need go to my bed."

Awwwwwwww. Cute little hitting kid. So he got his time out and I got my chuckle for the day. :) 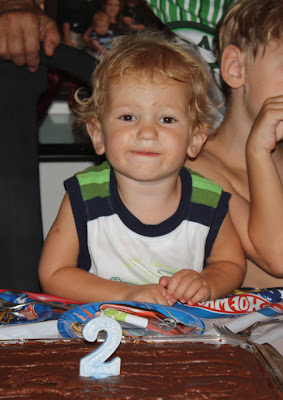 The last year of his life has been much harder than the first year, what with the messes and the tantrums. But he's still a sweet little guy and we love him a ton.

-Swim like a little fish.
-Follow his sister around all day long.
-Talk in full sentences.
-Sleep for 2 1/2 hours in the afternoon and still sleep close to 12 at night.
-Fiercely defend his property.
-Say, "Hi-ya!" as he hits or kicks you. (charming, eh?)
-Ask "What's that?" and "Why?" a hundred times a day.
-Go on family outings to the beach.
-Make messes with the best of them (just ask my mom, he attacked her computer with a marker last week.)
-Make his mom smile.

We celebrated his big day quietly at home-cake, ice cream, and a few presents. I was so glad Vanessa (the pregnant maid) wasn't around to tell me what a horrible mom I am for not spending $1500.00 on a party that he wouldn't even remember. At least my parents were here, so we had a couple of guests.

I teared up periodically throughout the day and by the time Guapo got home from work, I was ready for a good cry. Unless we get a surprise baby, this was our last 2 year old birthday. In one year's time we should be officially done with diapers (hopefully!), highchairs, cribs, pack and plays, etc. etc. I am so torn between wanting my kids to be independent and wanting to always to have a little one around the house. Oh well. That's life I suppose. I've just got to to enjoy each day with them. :)

We love you Pedro. Happy Birthday! 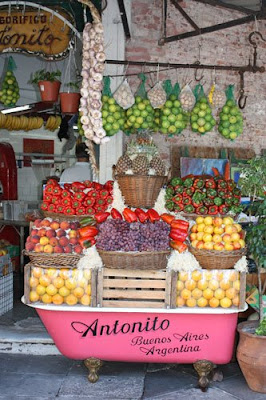 My life has been pretty full lately-my parents visiting, Carnaval, and I just got back from Argentina. My parents called a few days before they got to Brazil to see if I wanted to to with them to Buenos Aires to serve as their Spanish-speaking tour guide for a few days.

A tranquil flight with no kids?

Three nights in a 5-star hotel? 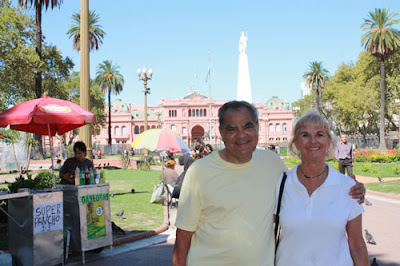 Last October, we went to Argentina to celebrate Julio's 8th birthday and had a great time. We did a lot of the same things that I did last time with the addition of:

La Boca is a poor section of Buenos Aires in the South side. It was founded by immigrant Italians who at one point wanted to establish their own republic. Argentina didn't go for that. It's on a port and when they were constructing their houses, they would just use supplies that were left over from the port. So, their houses were multi-colored because they'd run out of one color and start with another. 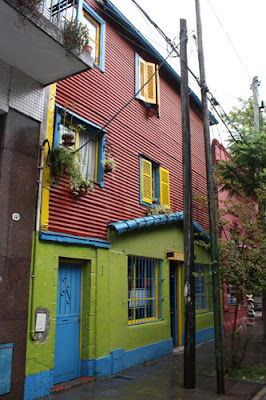 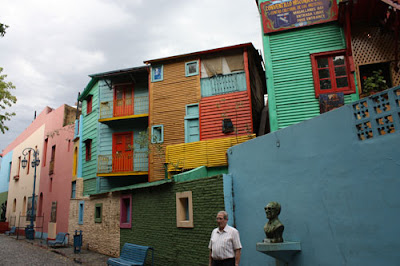 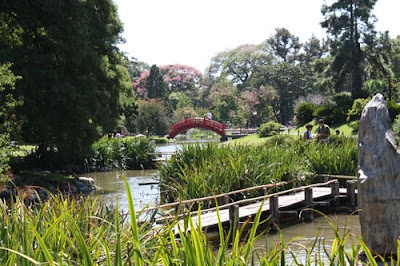 Lots of icky carp there: 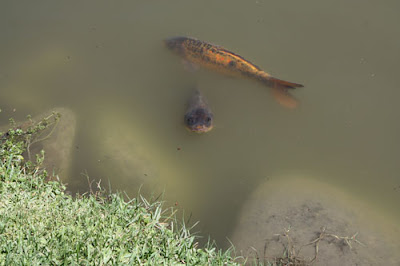 3) The Awesome Cemetery, with a guide

When we went in October for 2 days we went to the Recoleta Cemetery 2 times-it was that cool. But, I so wanted to do it with a guide. But, unfortunately, Guapo is staunchly Anti-Guide-he thinks all guides just make crap up. I, on the other hand, appreciate a good guide-even if it's they're making some of it up, I figure they still know more than I do.

So, my wish came true and we got to visit the cemetery with a guide. Here he is: 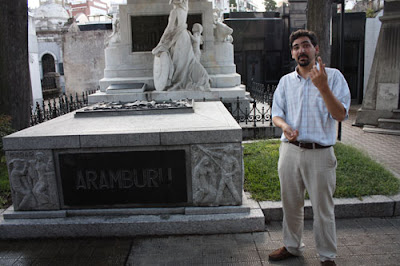 He's standing in front of the grave of the guy who staged a successful military coup against Juan Peron and then had Eva Peron's embalmed body hidden for nearly 20 years (it was buried under a fake name in Milan, Italy)!

(How in the heck would I ever have known that without the guide? Thank you guide!!!)

Here's a scary little story-see the statue of this girl with her hand on the handle of the door? 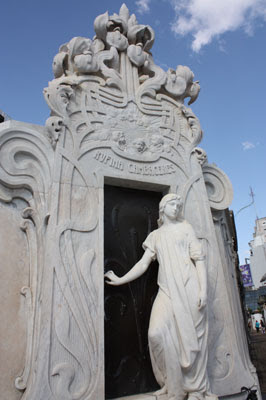 She supposedly went out to the theater one night with her friends and mysteriously died. Her grandmother, who lived in France couldn't believe that she was dead, so she traveled to Argentina and made the family open up the tomb so she could see the body. They found the body, but with scratches all over the casket, as if she had been buried alive and had tried to escape. Ewwwww. The guide said it was probably just urban legend and that the other theory is that the casket was tampered with by vandals seeking the jewels she was buried with. Let's hope so.

Here are a bunch of kitties who live in the cemetery: 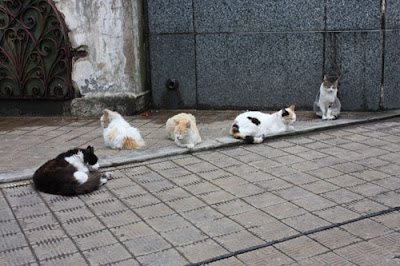 4) A Tango Show. I wanted to go to one so bad in October but we didn't know if it would hold the attention, or worse, hold the attention a little too well, of an 8-year old boy. I'm not a huge connoisseur of of dance, but I really thing the tango is cool. 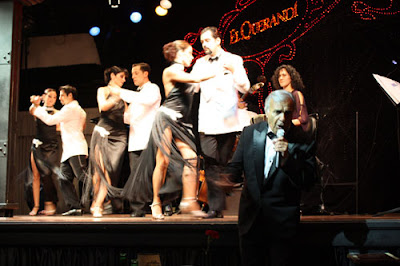 Can you believe it's already March?

Posted by Gabriela at 5:32 PM 7 comments