Pedro is excelling in his Two-Year-Old-In-Training program. Really. I'm talking A+ work.

He is monitored in three categories: speech, temper-tantrum throwing, and destructive capabilities and he has fared quite well in all three.

Most of his speech at this point has to do with what HE wants which means expectations are being met for our future 2 year old . He has mastered the following phrases:

-No Way! (normally used when asked if he wants to take a bath or go to bed)

He is a decent little temper-tantrum thrower. His techniques include but are not limited to:

Final grade: B (I've seen better at this age; he's lacking in a certain creativeness in this category (we have yet to be bitten). But overall, not to shabby.)

This is where Pedro really shines. He has true talent in this category that hopefully someday will be used for good instead of evil.

Of course we encourage him to draw on paper: 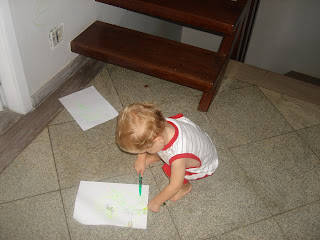 ...but, he feels it really stifles his artistic ability to be limited in such a way; so, we find his artwork throughout the house (and believe me when I say, this is a very small sample of his work): 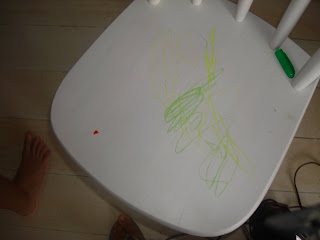 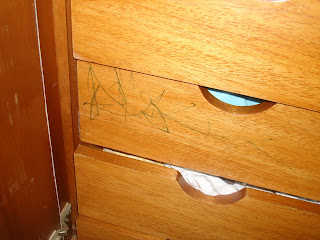 Sadly, sometimes he doesn't know when to stop: 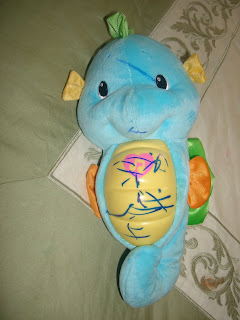 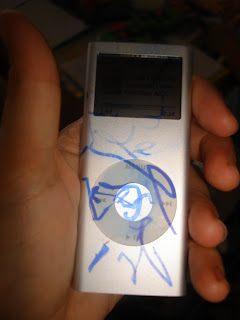 (yes, that's MY ipod. and the pen was a sharpie. Grrrrrrr. When I discovered it, Julio wisely told me, "Mom, you should keep your ipod in a safer place." Don't you hate it when kids are right?)

He can't take all the credit here, he owes some of it to his older siblings who somehow al-ways manage to leave contraband markers within his reach.

A few days ago he decided to try a new medium out.

In this case, he owes a debt of gratitude to the maid who thought it would be a good idea to leave the paints on the bottom shelve in the toy room. Passive agressive attack? Possibly.

Before I realized the scope of the problem, I, of course grabbed my camera (rookie move): 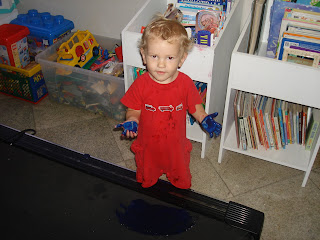 ...before I knew it, he was taking it to the next level: 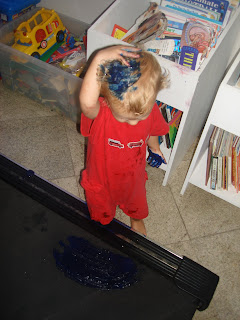 I delivered him to the maid to clean him up (I figured that was only fair since she had left the paints within reach) while I surveyd the rest of the room. It was not good: 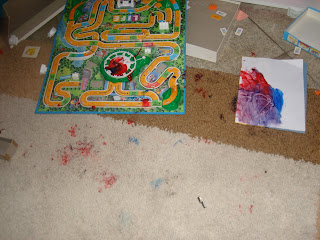 (I was in the room when it happened! 5 ft away! He is a very quick, and practically undetectable to the human senses.)

Look at this face: 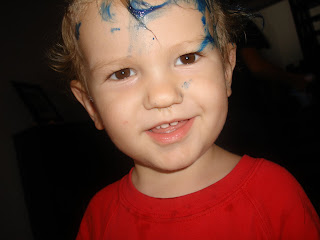 No remorse whatsover! (Let this serve this as a warning to those we will be staying with over the holidays-hide the art supplies!!!

Bravo, Pedro, you will make a wonderful 2 year old!

Adorable...
and you put it all in such a positive tone...I love it!
A+ to you my friend for your never ending patience!
BG

unfortunately, I think we have the same kind of education going on over here.

AAaaahhh--paint left on the bottom shelf!!!!! Definitely the passive-agressive thing. What an artist!

Hahaha! I know he's being a little punk but I just want to give him a hug--you've got to admit those pictures are pretty cute (probably not so much in person though, I'm sorry for the messes!).

Forgot to tell you I'm reading Geography of Bliss. It is SO funny, I can't stop laughing. And I'm not even the LOL type! Thanks for recommending it.

He is adorable! He knows that he can get away with anything with that cute smile of his.

Your poor iPod!!! Right now I keep a pretty tight lock down on writing stuff (even then we still have "artwork" on our walls) but I know that the more kids I have the harder it is going to be to keep things like that locked up. At least he is excelling in his class work.

we have sharpie pen pigs all over the side of the television, pencil all over the hotel wallpaper. we finally decided that we would give ourselves tatoos and the body and face painting craze began. but honestly it is so hard to be mad when they give you that sweet smile. he is growing up so fast.

Funny how it's always a Sharpie. And how the perpetrator always looks so innocent...

Thnak you for saving the very best for last. The last picture is worth a thousand words. I also give him an A+++!

Contraband sharpies. We did not have sharpies in the house until they were old enough not to do any of that ;)

Thanks for having the presence of mind to document Pedro's mad skills.

Pedro, you naughty boy! Have you been hanging around Kate too much??? It's a good thing you're so cute!

I just made a rule that all pens and pencils must be out of reach of ALL CHILDREN because I have found many writings around the house lately. Some of it is Kate's doing, but I'm thinking the drawings with "Eleanor" written underneath them are Eleanor's doing.

Ahh, I had one of those.
Justin seems to be fairly mellow as far as his 'artistic abilities' so far, but he and Pedro are neck and neck on the tantrum level.

A+ for the cuteness grade, Pedro!!

So cute!!!! I too have a two-year-old in training and I think she is learning quite well. Doesn't have quite the vocabulary that yours has, but she does excel in art-everywhere department and is getting better at the temper tantrums (we have a really good one this AM over the dreaded carseat.)

As I wrong, or is he a clone of your husband?

Pedro would be the perfect match to my niece who just turned 2 last Saturday.

Markers of all kinds are kept ON TOP of the fridge at our house!

my sister's two year old is also an over achiever at being 2! I am far beyond those years- but I have several nearly preteens- two of whom are girls- hope I survive.

I have a question for you- Do they have ornaments for Christmas trees there? My missionary son is supposed to get his yearly ornaments from there- but says he can't find something. I know you are nowhere near his area- but do you have any suggestions where he could quickly look on his Pday?

Head Nurse: I have seen Christmas stuff at the malls around here-but I haven't really looked for ornaments. As far as something "Brazilian", I don't know. i'll keep my eyes open. :)

Thanks- his time is very limited, but I will feel bad if he comes home without anything after two Christmases.

I will pass on that information, and I appreciate your reply- Have a great visit with your family-