Last I shared, we (well, Guapo) fired our first Big City maid because of all the weird stuff she did and for leaving the kids alone. It's been a rough road since then.

(Monday after Christmas Break) I picked her up from my friend's house on a Monday morning and she was gone 24 hours later. Her sister called me and told me she left because I had starved her. Hmmmmm. Not exactly true. Unless, if by starved she meant asking her to make me a list of all the things she wanted from the grocery store and then buying everything she wanted and more, then I guess, yes, I did, in fact, starve her.

(...3 days later) Replacement Muchacha #2: A charming lady who showed up on a Friday while I was enjoying my 3 morning hours without my kids with her very sick 3 year old grandson who followed me around the house and coughed on every square centimeter of my house.

(the following Monday) Replacement Muchacha #3: An actual gem. I love this girl. Great with my kids, doesn't annoy me, good cleaner. She didn't show up on Monday, 19 days before my due date. Then she came Tuesday to tell me she has an ovarian cyst and won't be able to work until the problem is taken care of.

(yesterday) Replacement Muchacha #4. Nice lady but I can tell she has already raised her 4 kids and doesn't want to be around my little cherubs. We are T-17 days from having baby #4 and the woman doesn't want to help out with the kids.

So another one will bite the dust and I will sit her and hope that #3's cyst bursts soon so she can come back to me!!!

Yay!!! Would you look at the little ticker above? Only 26 days to go (or less). I am so anally punctual that no child of mine would dare to be born after my due date.

Did I just jinx myself? Probably. 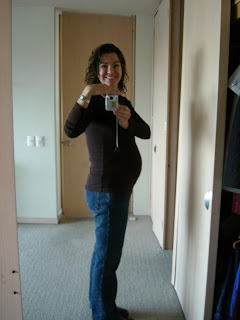 Juan Carlos Wrestles with Death (well, the idea of it at least): We had a turtle pass this week which was very sad for everyone. Guapo aptly fulfilled one of his "Man/Dad" jobs and buried the little guy in the garden. Juan Carlos just doesn't get it. And who can blame him? He's not yet 4. He came up with some great suggestions as to how to revive the poor thing.

I tried to explain, "His body doesn't work anymore, but his spirit is with Heavenly Father." To which he replied with a quizzical look, "Heavenly Father lives in the dirt?"

I love it when they say cute things like that!

We love having visitors. We didn't have so many down in Small Town. I just can't imagine why what with the big shrimp and the monkeys...

Last week our friends that we had made while we were all living in Venezuela came down for a visit from Springville, Utah.

Highlights from their trip:

1. Seeing things we haven't seen before since we have lived in Big City.
Namely: Teotihuacan. 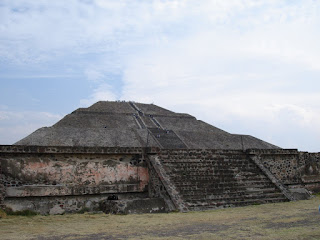 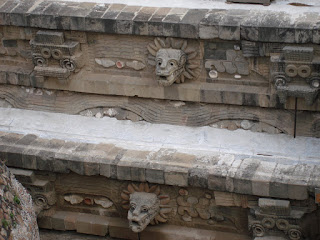 We all climbed the pyramids. I wasn't going to, being 8 months pregnant and all, but my competitive spirit got the best of me and I climbed the Pyramid of the Sun. I have to admit though, that all my kids, even little Juan Carlos (3 yrs old) beat me to the top. 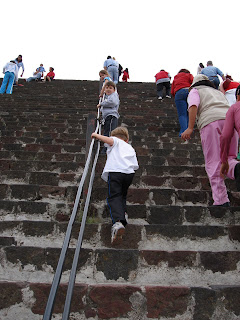 Here's a cute one of my boys getting along for 30 seconds. I was pretty worried the whole time that one was going to push the other off, but much to my surprise, they both survived the close encounter. 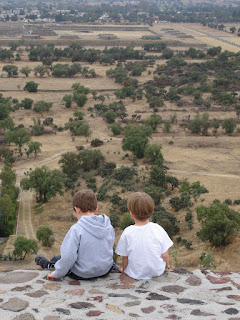 Teotihuacan is teaming with vendors that approach you about every 5 seconds trying to sell all sorts of knick-knacks and "one-of-a-kind" artifacts. They really had a thing for our friend, whom they followed around like he was the only tourist there. Here's one following him even though our friend has NO interest in his merchandise: I can't complain too much about the vendors as I did buy this new tablecloth that I love: 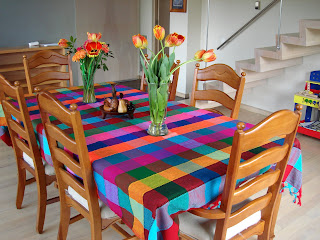 After our visit to the ruins, we had lunch in an honest to goodness cave. 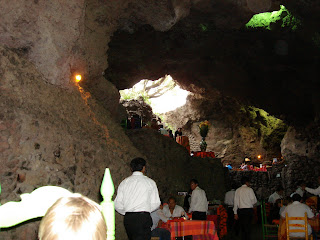 Have you ever been to Casa Bonita in Denver? It reminded me a lot of it in that it was over priced and the food wasn't that great, but it was an authentic cave so I guess you've got to pay for that.

Oh, random side-note. Here's my new favorite Mexican road sign that we saw on the way to Teotihuacan: 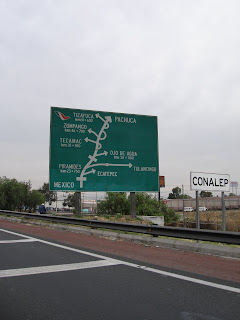 3. Playing Games. While we were living in Venezuela we would often get together and play games. Our game playing was severely limited due to a discovery that our friends became hooked on "24" last season, but have not yet seen the earlier seasons, most importantly, they have not seen season 1. They didn't even know who Nina was (gasp) !!! Or what a stand up guy President Palmer was, so of course we had to start watching it with them. So, #4 was: 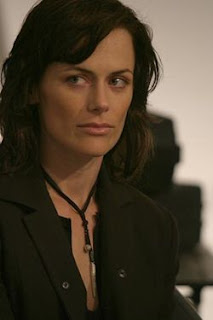 5. I almost forgot-eating homemade cream pies! Banana, chocolate and coconut. I really think think that our friends' visit was worse for my pregnancy weight gain than Christmas and New Year's combined-we'll see next week at my weigh in.

We had such a great time!

The number of posts I have missed during the last 12 days according to Bloglines. Sorry MOFs.

My poor little blog has been neglected. :(

I have not had a baby, we have just had friends visiting for the last week.

I will be making a blogging come back.

Right after I take a nap.

Posted by Gabriela at 1:25 AM 6 comments