First Impressions: It's Good to Be Pedro

Ok, now it’s the time on my blog for me to make blanket generalizations about a country and a people that I’ve known for a little over 5 weeks.

My most recent observation: Brazilians LOVE babies. They seem very tolerant of all children, but are especially fond of babies. Perdo, out and about in his stroller or his Baby Bjorn is like a rock star. Women go out of their way to stop and coo at him; and when he delivers his sweet little smile they just go crazy.

Here he is in his stroller a few days ago-pretty cute huh? 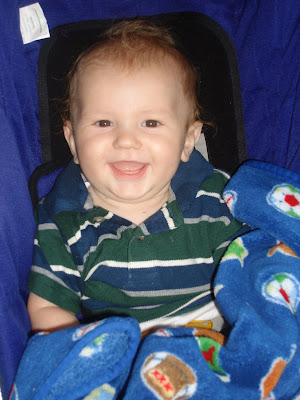 The thing that is most surprising to me is it is not just the women who are interested in babies; the men seem equally enthralled by little ones. The other day two government- type-worker-men came over to fingerprint all of us for something. When it was my turn I told them I would be right back, that I was going to go put Pedro down and one of the guys said, “No, let me have him.” So he held him and must have interrupted his buddy who was trying to fingerprint me 5 times because Pedro was smiling or laughing.

Last week, I had to go to an orientation at the school for Margarita. I took Pedro with me. All of the parents, teachers, and support staff were sitting in a room listening to the headmaster give his spiel about the school when Pedro started to fuss. Two of the school’s librarians got up out of their seats and came over to me and asked me if they could take him up to the library for me so I could listen to the rest of the presentation. They looked like nice enough women and there are guards at all of the entrances of the school just in case they were really kidnappers disguised as librarians, so I handed him over.

I went up to retrieve him about a half an hour later and this is what I found: 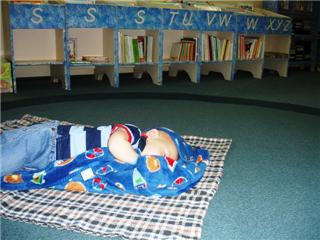 Obviously they weren’t reading The Deathly Hallows to him!

Pedro is such a cutie!

The picture I have in my mind of the two men-one trying to fingerprint you and the other giddy over the baby is pretty funny!

That must be nice. I sometimes think that here in the US we are a tad paranoid about our kids and letting strange people approach them.

I agree with awesome mom. I think for the most part people are nice and genuinely are interested in kids -- and that I can be a little paranoid!

Those cheese sticks are yummy looking!

Aw, that must be so fun! He's completely adorable.

With a baby as cute as Pedro, can you blame them for wanting a better look?

He is sweet!
What a breath of fresh air to have people enjoy children...
Sounds like my kind of country.

Pedro is so adorable! i can't decide if he looks like JC or Julio. He does look a little like M too! But it's so nice to be in a place where people are just plain nice.

I agree. Who can resist Pedro's charms? I will babysit him anytime!!! Looks like you're all having fun there!

Who could resist that chubby cheeked bundle of goodness? He's a doll! I'm glad you're feeling the love in Brazil.

He's adorable! Maybe there just aren't a lot of babies in Brazil (and that's not to discount his complete cuteness). I've noticed that the place that people take the least notice of my babies is Utah, and I usually just chalk it up to there being so many babies there.

I'm glad there were no kidnappers disguised as librarians :)