Wouldn't that be funny? It would explain my lack of posting...

No, I'm not really pregnant, but we do have a little "bundle of joy" arriving two weeks from tomorrow who will likely cause me as much work as a newborn. 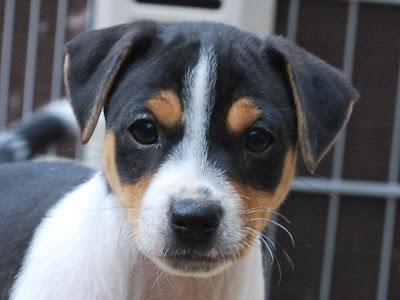 We've come full circle here, folks. We started our marriage out with dogs, then we moved on to kids, and now, I guess, we're back to dogs (well, just "dog" for the foreseeable future, if I have any say in it, which I probably don't).

This one's all Guapo's doing. He's the dog guy. I've been holding him at bay for 9 years thanks to our "apartment living" and "frequent travels". We always told the kids we'd get a dog when we moved back to the US, and here.we.are. But it's not really the kids who want the dog-they are cat people thanks to years of my brainwashing. It's all Gaupo. (And guess who gets to get up at 5 am to let the little guy out? I've paid my dues over the last 12 1/2 years, thank you very much.)

Have I mentioned we have new furniture for the first time in our married life? Oh well, it was nice while it lasted.

Since he's a Brazilian Terrier, bread by a Brazilian here in Wisconsin, he will have a Portuguese name, chosen by Guapo. And that name is (drum roll please) "Cuecas" (pronounced quay-cuss). That means boy's or men's underwear in Portuguese.

Why, you ask? I'm asking the same thing. It is kind of fun to say I guess, but really, who names their dog "Underwear" ?

Margarita says she's just going to lie about what it means there aren't a lot of Portuguese speakers around here. That's probably a good idea.

He is SO cute! I agree with Margarita, I would lie about the name to.

Lol! He is a cutie though.

sniff, sniff...Cuecas is such a cutie...
it is a cute name as long as you don't know it's meaning!

That is certainly an adorable puppy and I'm so happy for you, especially since it's Guapo's idea, and thus, his responsibility.

I know I can count on you to not let him forget it!

Cuecas reminds me of "Cuenca," a city in Ecuador. Margarita could say it's the name of a city in Brazil (or a remote village that doesn't appear on maps). For some reason, I also picture clothes pins when I hear "Cuecas."

I totally bought your blog title!

Cute Cute four-legged baby! I love mine so much- and once you get past the puppy stage (way shorter than human baby stage) it will be awesome-

I'm not a major dog person (I'm not really an animal person at all--don't hate me), but Matt, like Guapo, can't wait to get a dog. It's only a matter of time...

That does IS cute.

Your title sure caught my attention!

Cuecas is so cute! Nobody else needs to know what his name really means. :-)

Matt and I are both against dogs, but we hope to have chickens, goats, pigs, etc... in the future, so our kids won't be too damaged for not having any pets. I'm sure my kids will have issues with all the work they will have to do when we do have a lot of animals, though. :-)

If I havent't seen you back in March, I would have believed your title LOL!!!

Margarita is 100% right. No explanation about the meaning of the Puppy's Name ; )

I can't wait to tell Bryan about his name. He will get a kick out of that. Maybe it's a guy thing.

So cute--let me know if you like that breed. We will be getting a dog in the next year--as soon as a fence is up in the backyard. I have mixed feelings because I'm afraid I'll do all the work but oh well.

Also, Ty is sitting on my lap begging to see the picture of your dog--he is a cute puppy.

P.S. My son- the former missionary in Campinas- LOVES the name! He laughed out loud- for real- when I told him about it this morning. He said that is an awesome name. But then, he is a guy who speaks portuguese.

No dogs in our house ever. You are WAY better than I am.

he's a cutie, our dog is as much work as the kids...but less worry than the teens :)

Did Guapo cry when he read your post's title?

Awww, Cuecas is cute!
Tell Margarita I'd lie too :)

When I was young one of our dogs had puppies. They were cute, tiny and cuddly so I nicknamed de Perribebés. Only my brother called them Perribobos (stupid dogs), we sold them all but one, which my dad of course named Perribobo. I'd lie about the dog's name all the time. Good times, good times.

Oh, thank you for the laugh-out-loud moment this afternoon! Naming the dog underwear. He is a cutie, though. Good Luck! :)