Can you believe it's mid-March already? Weird.

Well, you'll all be happy to know that my orchid is alive and well. Check out all of these blossoms: 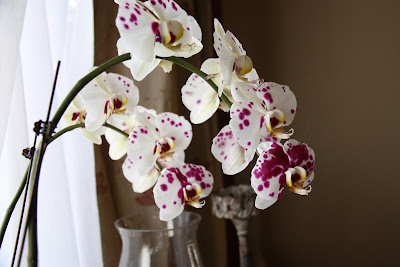 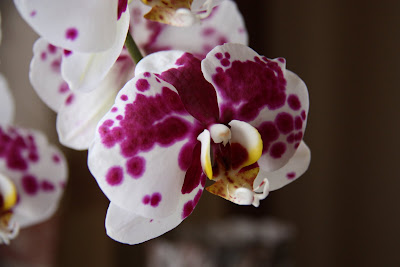 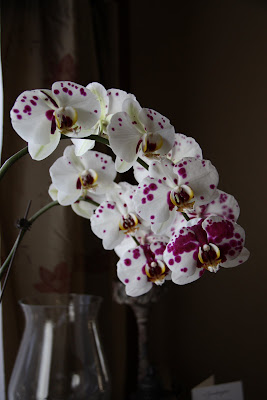 It has now officially been in my care for one month and two days. Hard to believe it's even alive, let alone gorgeous! For my flower friend BG, here's how you care for them: the more you ignore them the better. While they are blooming, water once every 5 days (pick up the pot to tell if they need water instead of feeling around the top of the dirt-if it's light, it's time to water). When they are not in bloom water approx. once a week. DO NOT place in the kitchen next to ripening fruit. DO place in a spot where they will get a couple of hours of direct sunlight. Spray flowers and leaves with water occasionally. It is better to under water than to over water.

Fortunately (and unfortunately), my nine month bout with plantars fasciitis is coming to an end (knocking on wood right now). After buying almost every product on the market to treat it-massaging foot balls, calf exercisers, orthotic inserts, a hard boot to sleep in, I came across my new best friend (I feel like I should name him): 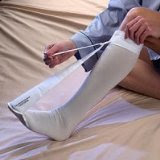 It's called a "Strassburg Sock". I don't know who Strassburg is or how he or she came up with this nifty little item, but I can walk again! I can run again! I have practically no pain. (if you ever suffer from plantars-don't waste your time on anything else, just order one of these babies).

The bad news, that comes as a result of the good news, is that now I really have no excuse for bowing out of my portion of our relay race. No one else is dying to do it and so I have come to the realization that IT IS MINE. I am owning the 24.7 miles I will have to run in less than a 24 hour period.Oh, but wait-they've changed the route once again and increased my mileage up to 25.2; I know that's only a 1/2 a mile but it's on the last leg, taking it up to almost 10 miles. Not good.

This is a serious time drain for me right now because a) I'm trying to work out twice a day a few days days a week now so my body gets used to it and b) I can't sleep at night because I'm so stressed about it.

A Swimmer is Born

After what she thought was a horrible try-out, which included crashing repeatedly into a supposedly uber popular boy in her grade and being less than confident in her butterfly stroke, Margarita made the summer swim team. The girl is willing to be in the pool every morning of her summer at 6 am. I personally would NEVER opt to do a sport that would require me to be up at that awful hour-but more power to her.

I Saw The Jimmer

(This portion of my update is dedicated to my old roommates, Lynne and Steph-the two most loyal BYU fans I'll ever meet. I felt guilty being at those games being such a fair weather fan-they should have been there. Shhhhhh- I hadn't even heard of Jimmer until I read about him on one of their blogs recently (gasp! I know). What a lame Cougar I am.) 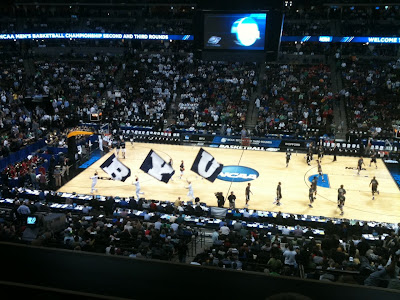 One of the perks of living near family is that my dad's bank has a suite at the Pepsi Center and they will often give him tickets and he often gives them to us. Four of us were able to go to the BYU game Thursday and Margarita and I went last night. We sat in the suite surrounded by Gonzaga fans and people making fun of BYU and Mormons, so it was pretty cool to win so decisively. (I guess you could say "they got Jimmered"-did I do that correctly?)

And "The Jimmer" is pretty awesome.

And now I must focus my attention on keeping my kids happy during their 10 day spring break (ummmm, I don't remember spring break being 10 days long) despite the fact that we aren't going anywhere.

First of all I am so proud of you and your Orchid. I don't think I could EVER keep it alive. I have a hard enough time with my lawn. Secondly I am SO glad you got to go the the games. I got to go to the Utah game in February. I am so glad the won as well. And yes you used Jimmered correctly. :O)

SOOOOO jealous of the orchid and the game! It was such an awesome win- especially after all the criticism and the powers that be picking the Zags to win- I am not a super fan- but I can't help but be excited over this.

10 day spring break- we only have three days around easter weekend- and we are going to the dentist. Doesn't that sound like fun? (we are going to spring camp with some extended family, too)

Such a beautiful orchid. I had one, it died, and last week I rescued a new one from the walmart garden center clearance pile. It isn't blooming, but the leaves look great, even though it had been overwatered at the store. I'm crossing my fingers that I can keep it alive.

Pretty orchid! I want to be motivated by your 25 miler coming up, but I'm 8 months pregnant so I guess I'll just sit on the couch and keep eating cookies:) Good luck!

I love the Jimmer, and I love how in love with him all the ESPN sportscasters are too. They bring him up all the time. It's awesome.

Knowing your were surrounded by Gonzaga loving fans who made fun of BYU--I'm even happier we won by so much. And I'm glad you got to go! Jimmer is fun to watch.