My Boys and Their Hair

Hi there! Remember me? That's ok if you don't, I don't blame you. I've been on a relaxing, unannounced blogcation. We're all fine here-I have no excuse besides having 4 active children and not a real good grip on keeping everything and everyone under control.

But, the annoying thing about the blog is that it never stops bothering me. I tried at least 4 or 5 times to declare myself a non-blogger but it never quite takes. So, here I am, for how long-who knows? I could go AWOL again at any moment.

I hope you all had a great summer. Didn't it go fast?

Julio (almost 11) finally wore us down and is now playing tackle football. I spend most of his games flinching as I wait for him to be knocked silly. His team is on the smallish size-so even though he's just under 80 lbs he's the 5th biggest on his team. Because of this, he always has to play on the line against boys that honestly look twice his size. He's remained unscathed so far (knocking on wood...) 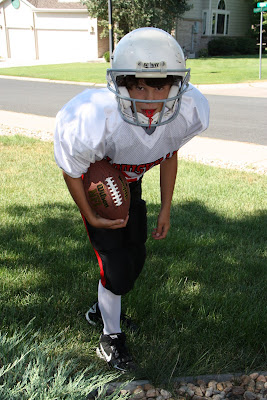 But this post is about hair. Julio's got some awesome hair-thick, wavy, dark brown hair that apparently the 5th grade girls love. He came home the first day of school and told me, with a sly little smile on his face, that at one point during the day no fewer than 8 girls surrounded him and asked him to "flip" his hair like Justin Beiber does (which "flip" he has perfected-I've seen him practicing in front of the bathroom mirror).

By the next day it must have gotten old because he came home asking Guapo to take him to get a buzz. The reason? He needed to make himself "less attractive to the girls". Of course when Guapo called his bluff and grabbed the car keys he changed his mind in a jiffy.

Oh how that one's going to give us problems...

Remember Pedro? He's 4 1/2 now if you can believe it. He goes to the same preschool as he did last year-his teacher adores him there. I'm grateful for that everyday because I can see how a person could go either way with him. He's still quite the handful. 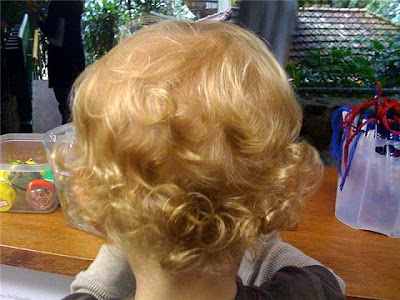 It lasted for quite a while, but recently I had noticed that it was looking pretty nappy. He was finally ready for a big boy cut. :(

Here he is all proud of his new do: 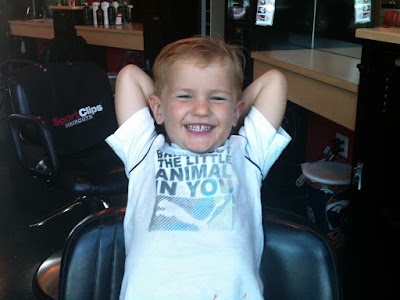 Have a great weekend. Hopefully I'll be back next week.

I am so excited to see your post. I am glad things are going well for you. I loved the Julio story, it reminds me of my brother David. :)

Love the football photo! So Julio...
And my little buddy?! He looks so grown up and as adorable as ever!
Glad your back...

Miss you so much!
BG

Yay! You're blogging again! Pedro looks so grown up!