I didn't mention Juan Carlos (8 yrs) the other day-he has no hair issues at this time (or girl issues, thank goodness).

But, I must say-the child lights up like 100W bulb when he's excited. People always comment on this aspect of his personality (and physiology). It's like his face actually lights up-like one of those glow worm toys. If you know him-you know exactly what I'm talking about. You can't help but smile when you see him like that.

Saturday was his first soccer game. He had fun playing last year and improved a lot-but he never scored during a game. Saturday he was fast, he always seemed to be near the ball, and he SCORED TWO GOALS!

The best part of that was watching him run down the field after he scored with a huge grin on his glowing face (it's also the best part because I didn't get a picture of him scoring an actual goal). 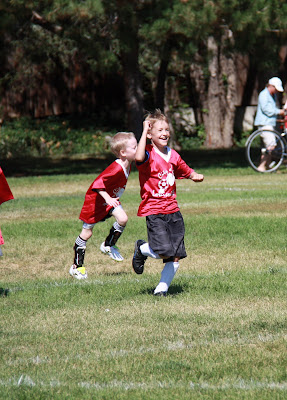 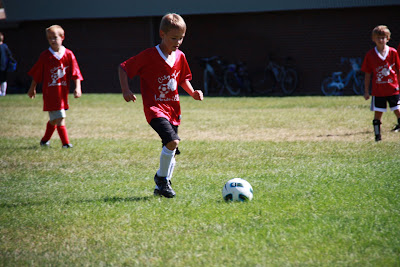 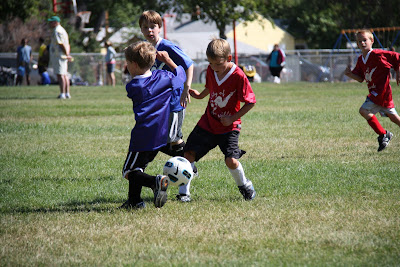 Remember how I said Julio hasn't gotten hurt yet playing football (and I very clearly knocked on wood)? Well, he got a helmet to the knee in the first five minutes of his game on Saturday and sat the game out. He's ok now. It was probably for the best-the smallest kid on the other team was bigger than him (Julio's one of the biggest on his team). A lot of big, tough boys. I was perfectly fine having him on the sideline with a bruise. :)


Fall is crazy-but it's fun watching the kiddos!

Your last post about Julio was hilarious. Matt and I were cracking up over him. And yes, Juan Carlos is the most enthusiastic guy ever--your kids are awesome:)

Sounds like a true American Fall...I love reading about it!
Juan Carlos is a cutie for sure...
Tell Julio to be careful out there.

I love watching my kids loving their activities. Now if I could only be less competative myself- it would be great. My kids play hockey and soccer- we go year-round between the two- and believe it or not- I would rather have them in their hockey gear- they are more covered up with protective gear, and the older they get- the more physical soccer becomes.

Lucas is 8 and we're still making him play flag football. We were going to do tackle this year but then decided against it. It is such a big deal here and I know eventually we'll have to sign him up for tackle.

I was feeling so out of touch for not being online for so long. I am a little bit relieved that I haven't missed much by way of your blog. Your boys have grown so much and I totally remember JC's smile. Your story about Julio makes me thankful that my own 11-yr old is still very much a little girl although she is nearly as tall as me! Hugs to everyone!

Ah! Soccer! It's so fun to watch them, isn't it? Sounds like you're having a great fall.