I know, it's not really the end of April yet, but I kind of wish it were. This month has been a tough one for us, and my 2008 goals have really suffered. 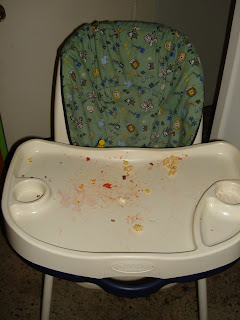 Dinner was hours ago and yet Pedro's highchair is still nasty. (I am supposed to be cleaning it right after he eats but that's obviously not happening)

Neither's picking up all my clothes, or learning Excel (I'm starting to wonder whey I ever wanted to learn Excel in the first place, it's been 4 months and I haven't had a need for it. Maybe we'll scratch that one)

I am still hugging my kids and playing piano occasionally and exercising fairly regularly so I guess that's good.

April's been a full month:

But, the main thing that has happened is that aliens have taken my sweet, mild-mannered baby Pedro and replaced him with a identical monster baby!!!

Suddenly he's arching his back,

he's banging his head on the floor in protest,

he's screaming and crying when I tell him "no",

he's obsessing with a capital "O" over getting his hands on anything with buttons,

he's pulling my hair and pinching my nose and laughing about it.

Tell me - WHERE DID MY SWEET PEDRO GO???

We had to hide the water cooler in Margarita's bedroom after he flooded the upstairs. Now he stands at her door and cries. It's only a matter of days before he learns how to open the door. 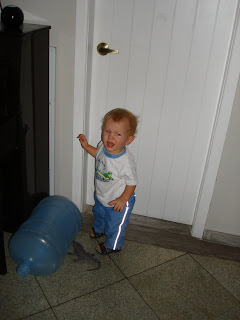 (that's a rubber lizard just in case you were wondering)

I know, I know, this is normal stuff-I had just kind of blocked this phase out of my mind and am stunned because it came on so suddenly.

I was not prepared for this and now I'm paying the price.

Ohh, hopefully May will be much better.

Yep, Jennifer is my friend. What a small world.

Yes, a new month is coming! Wow, you DID have a little more than your share during April. Another WOW: you ran SEVENTY MINUTES on Wednesday!!!! If all the sickness and casts in April didn't win you a medal, now you FOR SURE deserve one! Good for you.

I know exactly how you feel. I am going through that right now too.

My solution:
more nights out at restaurants with friends :)
BG

I agree with BG more nights out at restaurants with your friends!
did you get my message I meme you to fine out what it means just lick on to ann on my blog she meme me I thought it would be fun to play the game of course you don't have too.marina

Yuck. We all have these times in our lives when it feels like every trial seems to pile one on top of the other. I am so sorry. Hopefully, May will be better.

Not looking forward to that phase.

Justin has started being really LOUD.
Church yesterday was a joke.

I think my kids both of them did think they had the penthouse apartemnt b/c both of them where late my daughter was 2 days my son 41weeks and he was crying up storm when he did come out LOL!!
it's ok if you don't meme just thought it would be fun to get know you better but I didn't think you had? since you never did you 100 post!!LOL have a nice day!marina

You have had a tough month! Sorry about Pedro. I'm dealing with a 3 year old who is now deciding to go through the terrible 2 stage. Not fun! So far Kate hasn't been too bad, just dealing with molars coming in.
I hope May is a better month for you!

Wow, we've both had a tough time of it this month. If we lived a few miles closer to each other we could leave the kids with someone (not your maid, I'm thinking, or her mother :-)) and go to the spa for the day.

Two out of all those is still something. I also want to learn Excel and then, just like you, I think a rarely use it.

About Pedro: At least you have pictures and the good memories!! :D

Sorry Gabs, it'll be but a short phase and then he'll be back to normal (that's what I tell myself every single day).

I'm so sorry. I hate times like this when everything is so crazy. Hopefully things will get better soon.