No, I don't have Spring Fever.

In fact, quite the opposite.

I have this icky panicky feeling that winter is ending-after 10 years of perpetual summer, I'm not ready for summer to return. And it wasn't exactly what you'd call a satisfying winter here in Colorado, just a handful of snow storms (it is snowing right now as I type-so typical for Colorado-yesterday it was 80 degrees-now it's in the low 30's-tomorrow it will be back up in the 60's). I have this fear that once winter is gone for good-it's won't return.

Anyway, I've realized something about myself-I think I go through the majority of my "obsessive episodes" during the spring.

Let's review: 2006 we were moving from Carmen to Mexico City-moving is always a huge project that lets me obsess to the nth degree for months beforehand.

In 2007 Pedro was born, I went through my Freezer Meal Frenzy and then we had another move-this time to Brazil.

I can't find any major obsessions during the spring of 2008. I did, however start making individual photo "yearbooks" for my three big kids that year-I think that qualifies as slightly obsessive.

In 2009 I went through the Great Photo Frenzy (still painful to think about-what a pain), I was training for a half-marathon, and continued with the photo books.

2010 was the move from Brazil to Colorado-much obsessing took place about our "stuff".

So, the topic of this year's obsessions? First- my big run coming up in less that two weeks. The last two Saturdays my lady friends and I have gone out for double runs- a seven-miler in the morning and a seven-miler in the afternoon. It's not fun but it has definitely increased my confidence that perhaps I can run 25.2 miles in less than a 24 hour period.

Who am I kidding? My heart is throbbing and my palms are sweating just thinking about it. I'm scared, people!

My second, and primary obsession this year is food storage. This is the first place we've lived as "adults" where it is feasible to store a substantial amount of food. So, over the past month I have:

-gotten out my bag sealer and sealed up many a Mylar pouch with flour, sugar, oats, beans, and pasta

-made blueberry muffins using bean puree instead of oil (don't make that face-they were good!)

And today (drum roll please...), I made an acceptable loaf of whole wheat bread using powdered milk and a homemade dough enhancer. I can't tell you how excited I am about this. I've tried bread so many times and it always comes out like a big disgusting brick. 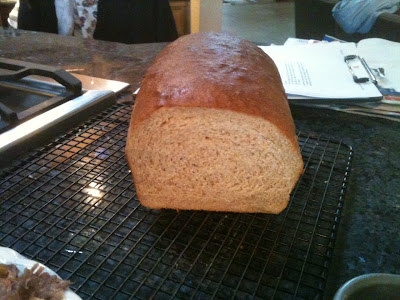 Yay! It's soft and chewy and the kids will eat it.

Have a great week.

I was wondering where you were ; )
I completely fell off the wagon after my race. I got this stupid flu and I've been coughing way too much. I went bak today and it was tough.

I love your obssession I wish I could "import" you and you could come and help me organize everything.

Good luck with your run!

I am always so impressed with your accomplishments! Wow. Great work! I wish you the best of luck in your big run.

Wow, Gabriela! That is an amazing list of things you are doing! (The bread looks WAY too yummy.) Wish my list was that productive.

Good luck on the run--we'll be sending good vibes your way. :)