We got back from our trip and I feel like I have blogger's block. I have nothing too interesting to write.

We had a relaxing trip to a beach that we love over by Cancun. I thought getting in the sun would instantly cure our dreaded illness, but it lasted to some degree for the entire trip. Our poor hotel-neighbors must have loved the symphony of coughs.

Here's a naughty turtle that someone made on the beach. He's smoking and drinking. 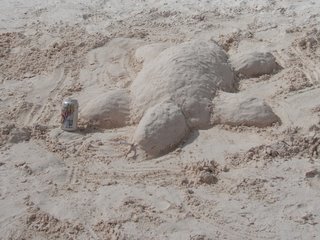 Here's my mom and Margarita kayaking. Check out how beautiful the water is: 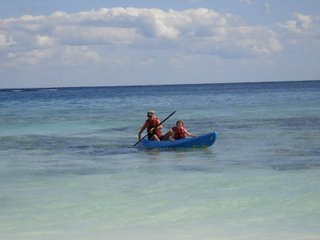 It was really fun putting on a swimsuit each day with my ever growing belly and having my mom and sister there who are both toothpicks. I felt like quite the beached whale.

Anyway, on to Plan December.

December always seems to fly by; I always have great intentions of enjoying the season with my kids and things always end up so hectic that it seems like before I know it it's over. So, inspired by my good friend Grammy (o Grammy, where art thou??), I am going to try to come up with a plan (BEFORE DECEMBER. Yes, I know, that's Friday.). I want to have a simple Christmas-y activity planned to do with my kids each day.

Another One Bites the Dust

So the illness that struck Guapo with a vengeance last week has systematically taken out each and every member of our family. As soon as Guapo was back up on his feet, he became the very competent male-nurse to myself and Julio (6 yrs). And just today, Margarita (8 yrs) and Juan Carlos (3 yrs) appear to have succumbed to the disease.

Mine ended up turning into bronchitis before I got on antibiotics. Coughing fits and pregnancy just really aren't a pretty combination.

Our Thanksgiving trip to the beach has been pushed back a day to ensure that I can make it through the airport with the three kids without passing out. I'm going to have to administer some significant amounts of cough depressant before we get on the plane or we are going to be HATED. Wish me luck!

And now, my one and only Thanksgiving decoration. It's a part of my latest Big City find: pewter. Check out this awesome turkey platter: 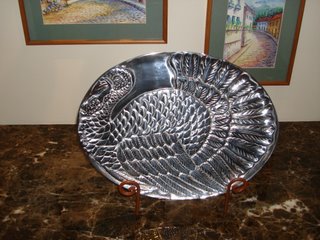 On that final note- Happy Thanksgiving!

Greetings from the Sick House

This past weekend was not the best ever.

For those moms out there, you know when your husband travels and you tell yourself you only have to make it to "X" o'clock (the time he gets home) and then you get some relief? My relief was supposed to come Saturday morning at 11:00.

Guapo was dropped off at the school where the kids had a function and the second I saw him I knew there would be no relief. Poor Guapo returned to Big City with some nasty Small City flu/cold. He was pale, shaking and fevered. He spent the rest of "Field Day" in the car sleeping.

And the next two days.

Luckily, he has since joined the living again, but I went pretty crazy Saturday and Sunday after a week of being by myself with semi-sick boys who were too sick to go to school, but not sick enough to lay in bed all day.

So Saturday we had Stake Conference and our RS presidency was in charge of preparing dinner for Elder Scott and the other visiting and Stake leaders. With Guapo out of the picture I had to pan out the kids; between the driver taking the boys out to dinner at McDOnald's (poor guy), and the babysitter, and her mom, who were willing to watch them at her house instead of mine I finally got it worked out.

We were pretty excited to get to meet Elder Scott. We got there early and set everything up and then just waited. Here's the nicest-lady-ever who is our RS president and the cute Columbian who cut my hair. 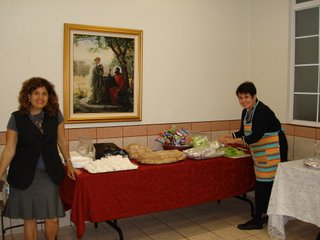 And here' s me with my part of the assignment: lots of cookies. 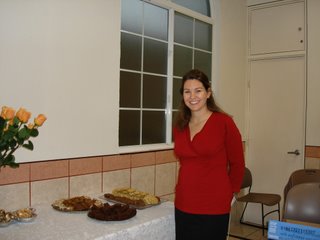 The bad news: Elder Scott never came to eat, he was doing interviews the whole time. :(

Sunday we stayed home from conference because Guapo was still so sick, and I would have had to take the kids in a taxi (little parking), and then control the 3 of them for the two hour meeting in Spanish with no primary relief. No thanks.

I was going to post the recipe for this slime stuff that kept Margarita (8 yrs old) and Juan Carlos (3 1/2 yrs old) (Julio doesn't love getting messy like those two) busy for 1 1/2 hours+. It's made out of food coloring, and cornstarch. 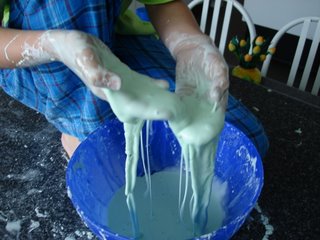 But when it took us 2+ hours to clean it up, I thought I would spare you all. There was cornstarch EVERYWHERE. Footprints on the floor, spots on blankets, the toilets, everywhere.

The boys fought all day and I thought I was going to lose my mind.

Luckily everyone went to school yesterday morning and my sanity level is slowly returning to normal. Now I'm just praying I don't get the nasty Small Town disease.

My mom has been asking for a new belly shot.

So, here I am last Saturday: 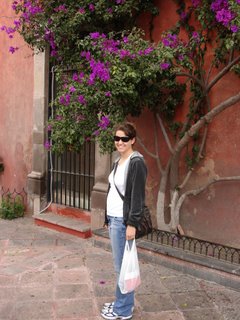 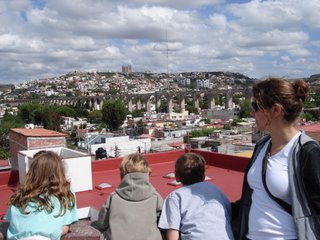 As you can see, I am still refusing to put on a pair of maternity pants. I rather suffer in my regular jeans than put on those dreaded panel pants.

I employ the rubberband method. Are you familiar with it? Here let me show you what I mean: 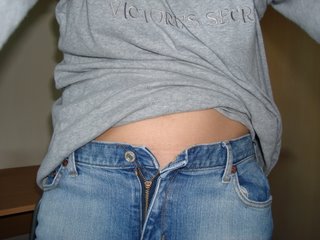 No Problem! Just add one rubberband: 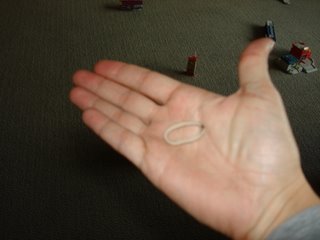 And Voila! Your pants can last for at least another month depending on the size of the rubberband used. 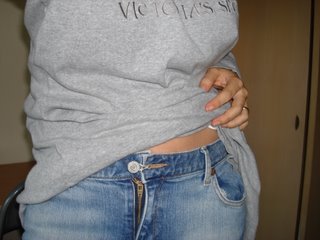 And there you go!

Driving is a major part of my life here in Big City. The traffic is horrendous. Really. Two weeks ago Guapo and I were out and about, at a place approximately 12 miles from our home, and it took us 3 solid hours to get back. Not fun. I could never describe it so you would believe just how bad it is.

But, in this new, informative series I will provide a breakdown of all of the problems that cause us to drive like maniacs and contribute to the major traffic headaches here in Big City.

The multi-faceted problem I wish to highlight today is: signs. 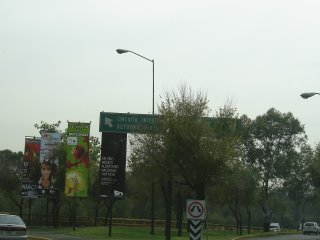 This one has gotten us before; if you can't read read it, it really isn't helpful. 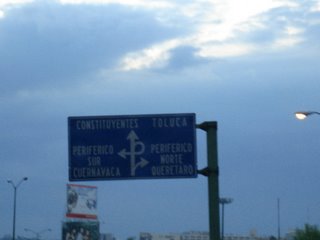 Now, I can figure this sign out; I am an intelligent person. The problem is that signs like this seemed to be positioned right after curves; you approach the sign going 50 mph and it is situated no more than 2 feet in front of the exit you need so that while you are trying to decipher it, whoops, there goes your exit.

Problem #3: the disappearing sign (no need for a photo)

No more signs for your exit.

"But there was a sign," you think to yourself, but now you KNOW you've gone to far. And you find a way to turn around and hope there's a sign for the exit in the other direction.

Posted by Gabriela at 5:21 PM 6 comments

I survived Halloween 2006. I swear we get more Halloween living out of the States than we would if we lived in the States, but maybe I'm wrong. The last time we were living in the States for Halloween was when Margarita (8 years old) was 2.

From my childhood, I remember having a little party at school the day of Halloween and then trick-or-treating that evening. Here, we had 3 different Halloween parties (outside of school), two rounds of trick-or-treating, one round of trunk-or-treating, and of course the school parties. By the end of last night I was exhausted.

So, as sick as I am of all things Halloween, I had to do a post on it because No Cool Story wanted a report on Halloween in Mexico. Mexico doesn't "officially" celebrate Halloween, but Dia de los Muertos (Day of the Dead), and Dia de los Niños Muertos (Day of the Dead Children. Sounds a little morbid, don't you think?). I like these holidays; families remember those that have gone on before them and leave out offerings of things they liked (like food and such) in a kind of shrine presentation. Here is a picture of the "ofrendas" in our building: 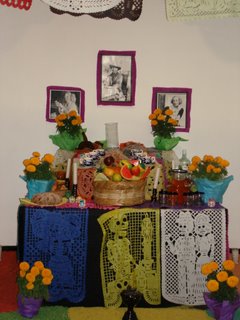 But, I have to report that Halloween is alive and well here in Big City. The stores are filled with pumpkins, ghosts, spiders and lots of snack-sized candies. All of these decorations were purchased here in Big City: 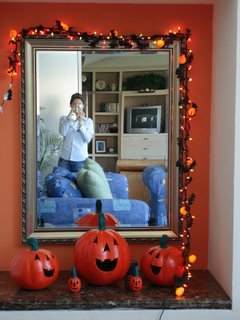 A fine variety of gourds (and some more ceramic pumpkins): 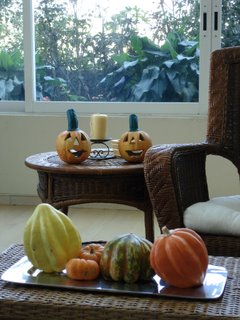 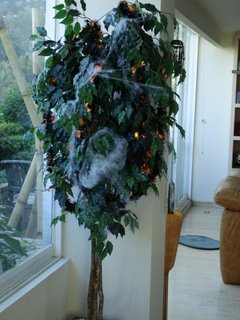 So, I was thinking, well, maybe just the commercialization of Halloween has struck our neighbors to the South, but then last night as we were out and about driving I was shocked to see TONS of little Mexicans (and some much older ones) dressed up as little devils and ghosts walking through the streets with a loot bag in their hands. So, it's not just the foreigners that are doing the Halloween thing.

Here's a picture of some authentic Mexican trick-or-treaters. It's not that great, but I was driving at the time and I almost got in a crash taking this pic, so I didn't think I had better push my luck trying to get something better: 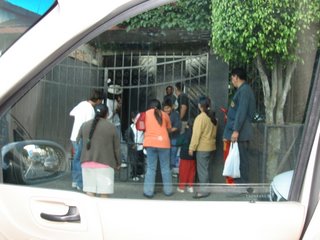 They don't say "Trick-or-Treat" though. They either just say "Halloween!" or "Queremos Halloween!" (We want/love Halloween! )

Here are my little goblins at our ward party: 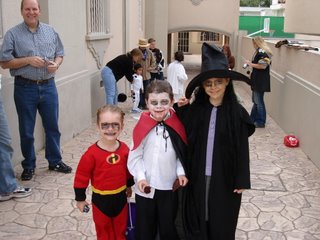 And some of the crappy candy we got trick-or-treating (most all of it is "enchilado" or chilied-up. Blaahhhh!) The maid is going to go home with a lot of candy this week. Hopefully that will keep her off of my ice cream: 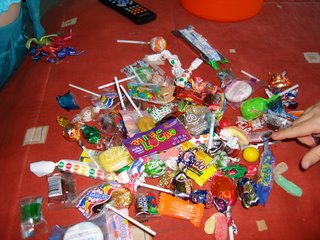 After we got done trick-or-treating last night, Margarita, distraught with the ratio of American to Mexican candy she received asked,

"Why can't we just be normal Americans?"

I said, "We are normal Americans."

To which she replied, "Then why can't we just live in our country? My whole bag would be filled with good candy if we lived there!"

Then I told her about the mean Americans who who hand out raisins.

Hope everyone had a safe, fun night!