Guapo's traveling the whole next week, so I'll be free to spend guilt-free time on the Internet at night.

But, for the time being a quick review of recent happenings.

Who Will Be My Next Top-Babysitter?

Ok, how weird is this?

This year's winner of America's next t0p model is a girl who lives three doors down from my parents house and who sometimes babysits my kids when we're there. I'm not a fan of most reality shows, so my mom had to keep me updated. Not that she watches America's Next T0p Model or anything (no offense if you love the show), she just hears the occasional neighborhood gossip.

She called last week and told me I'd better find a new babysitter because she probably won't be needing the money anymore. (and since young girls + money + fame doesn't often yield great results, I probably will want to find someone a little less famous)

Her little sister and Margarita always play together when we're in Colorado. It's pretty funny, because her sister is a total tomboy and has inspired many of Margarita's *interesting* fashion choices (black socks, plaid shorts, converse sneakers).

Not only did I bring Thanksgiving cheer to Julio's 3rd grade class, I spent 7 hours in a un-air-conditioned kitchen on a 90 degree day making my first-ever solo Thanksgiving meal. It all turned out very nicely, including the homemade rolls and pumpkin pie. I kind of feel like a grown up now. 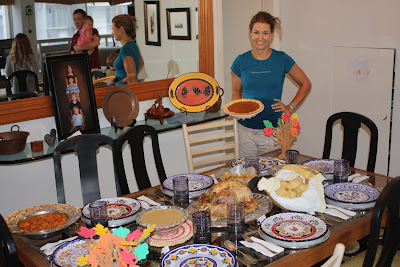 (don't mind my funky hair and my wet shirt. I'm pretty sure that it's dishwater and not sweat, but I'm not entirely sure, probably a mixture) 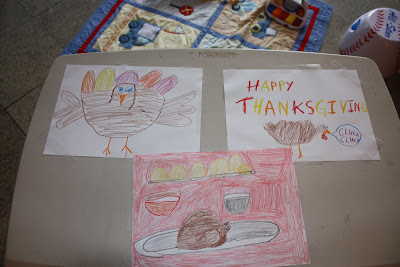 My Niece (and her mom and dad) Came for a Visit 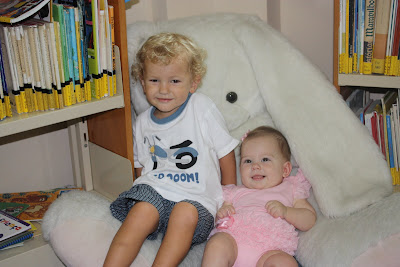 Isn't she cute? And such a good baby. Almost makes me want to have another...almost. (the little guy there on the left does a pretty good job at outweighing baby cuteness most of the time. This photo is deceiving.)

I had my second adult piano recital on Saturday night. It was held at the apartment of the older lady I mentioned after my last recital. She had invited 20+ of her closest friends including her entire computer class and some guy she had met in the line at the bank 2 days earlier (not joking). I walked in and saw all of those people cramped into a little apartment and I just about turned right around and walked back out.

But, I did ok despite my visibly trembling fingers. I made it through both my songs with minor errors and what was good was that I kept going on when I messed up which I normally have trouble with. I played "Old French Song" by Tchaikovsky and "Fur Elise" by Beethoven (the entire thing, thank you very much).

Now I'm recital-free until at least April or May.

Despite my awesome new tennis outfit, I got smoked by a 60+ year old lady on Tuesday. Pretty depressing.

I guess I'd better stick to 12 year old boys.

I've got lots of random Christmas tidbits too, but I'd better save those for my next post.

Don't ever take us 60+ year old ladies for granted.

Good luck finding a new babysitter when you're at your parents' house. I think it's neat that you know the next top model (as far as the show is concerned).

Your Thanksgiving feast looks so yummy! Way to go! I have yet to cook a turkey. I have one in my freezer that I need to cook one of these days.

I love the Thanksgiving artwork!

I love listening to piano music. I wish I could sit in on your recitals. :-)

And cute is Pedro with his little cousin.

You are doing your countdown to go home for the holidays and I am doing mine... Work at the end of the year seems too CRAZY for a pregnant woman : )

I so love random posts and hearing what you are up to.

Good job with Thanksgiving! I enjoyed cooking the entire meal, too, but not so sure I would have been as enthusiastic with summer weather.

Sounds like you've had a lot of fun things going on.

Interesting post. Just shows you again how small the world is (meaning the babysitter)!!
I love the new header you got. Cracks me up! :)

You have had a LOT going on! Yay for going home soon! (I say that with a big smile and a big fat feeling of jealousy!) Hahaha

Ohhh, let me ask you, would you mind sharing your recipe for your homemade rolls?? I want to make some for my Christmas dinner Im going to attempt..

ok, I want to be invited to the next piano recital! if she can invite a guy she just met 2 days earlier, then I get some preference next time ;)

Wow, babysitter as model...cool. (not really!) good luck with that one!

That was a fun- random just like real life- update.

Speaking of random- my son just started dating a gal who is great friends with a certain American Idol runner up from Utah- My mother in law is thrilled- I guess she is hoping she can meet him that way? Who knows. What is it they say about six degrees of separation?