The End of an Era

We put away Pedro's crib over the weekend. Here's the last picture ever of him in his crib that once belonged to his Uncle Matty (Guapo's brother and husband of my awesome SIL, Abby, who has big plans for her future, BTW. The crib's all yours Abby, rust and all): 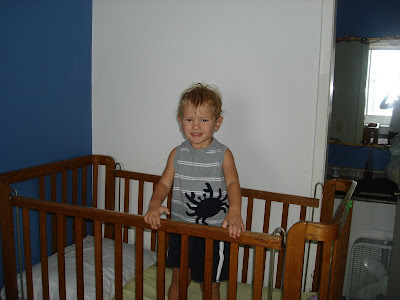 No more diapers, no more cribs. At least in the foreseeable future (don't roll your eyes at me, Guapo).

He's a big boy now at almost 3 years old and he and Juan Carlos (6 yrs) are going to share a room while Julio (9 yrs) is going to enjoy a little of being on his own. The maiden voyage didn't go so well last night-we still aren't back to normal time wise. Pedro kept poor Juan Carlos up past 11:30 and he had school this morning poor kid.

Which leads me to another sad loss...much more tragic than either The Crib or The Diapers...

Can I still make him take a nap? Technically, yes. But, it's not a pretty process. It usually involves me falling deep asleep (read: my mouth open with drool on the pillow) while he gleefully wreaks havoc on the room and then me coming to, realizing what's happened (again), and then wrestling him down until he finally gives up the fight.

But then he won't sleep at night until really, really late. Much later than I care to stay up with him.

On the bright side he's super cute again, after going through a bit of a tough spell before Christmas (lots of hitting, a fair amount of kicking, plenty of screaming, and even a little experimentation with biting. Ouch). He's quite pleasant now, comparatively speaking. His latest thing is that he wants me to carry him a lot (I remember my other boys going through this same phase at the this age) and he'll say, "Mom, can you carry me? I'm really busy." Today he changed it to "dizzy" but either way, it's totally cute.

And, he's going to start morning preschool in the next couple of weeks. I feel guilty about sending my kids to preschool so early (not guilty enough not to do it, but still), but everyone here (and all the other places we've lived abroad) puts their kids in "school" (um, can you say "daycare"?) at 18 months so I feel like an over-achiever for keeping them home until they're 3. But, because of this, Pedro hasn't had any friends outside of his siblings ever. I think he needs that now. We're getting quite bored with each other. So, that will be good-I think he'll enjoy it a lot.

Whatever will I do with my 3 kid-free hours a day?

I'm still laughing at the mental picture of you zonked out, drooling all over the place, and then waking up to find little Pedro up to no good.

I've noticed that people here also put their kids in "school" at 18 months, just like in Mexico and Venezuela. Is it just in the U.S. that people wait until age 3 or 4?

1. Cafeina
2. Swim with me
3. Play tennis once your fixed with the right racquet
4. Come hang out with me
5. Read and relax
6. Make my son your yummy cinnamon buns seeing as I still have not made them, much to his chagrin!
7. Practice with your new camera
8. Cafeina
9. Hang out with me
10. Relax again

Wow. You are way ahead of me. Toothsome #4 is still in diapers and still in her crib (even though she climbs out with ease). And, about three times a week, if I go on a long car drive, I can get her to sleep. I then stay in the car and read Heaven on earth.

LOL! I am sure you will fill the time all too quickly (speaking from lots of experience). When my oldest child- who was at the time an only child- started school, the first break, I wondered why he was infringing on "my time"- hehehe. I had become used to speed cleaning while he was at school- so having him underfoot for those hours threw me. I went through it again when my baby started school a few years ago- but not as bad, becasue I went back to work part time-

Also- be careful about saying no more- my sister had her "no more" baby, which brought her up to five babies- four of them girls.

For working women in Brazil, the reality is a bit different. For me, I would put the baby on the day car at 4 months old, as soon as my maternity leave ends.

I SO can't believe he's 3! The crib thing is a big step. As for what to do with "your" time, I'd give you suggestions but I know it will take you about one day to decide to fill it with your own amazing projects or goals! :)

That is an amazing hurdle, getting out of the crib stage.

You are going to love your time, and he will love it too!

3 kid free hours? Even better than a nap! You can actually leave the house!!

I WILL NEVER GIVE UP THE NAP!! At least not until they hit school age. :)
Have fun with your extra 3 hours!

Oh the crib...I know I told you to "lose" it before it can be passed along to us, but now that I'm facing the reality of house prices in D.C., a free crib (ANY free crib) sounds pretty good. When we have a baby, that is. Not quite yet:)

Is that the dangling from the ankle crib? That thing is ancient. It was my crib before it was Matt's, and probably goes back further than that.