For the first time in weeks, I have nothing to do. The movers are packing, the kids are at school, so I'm just hanging out.

After all of my work and stress (that I just discovered gave me a cold sore-boo-h00, and made me lose 5 lbs-yay!) I was sitting here this morning at 10:15 waiting for the packers to arrive.

My kids will all be coming home in 6 short hours and they haven't arrived yet.

So I call and they tell me that they don't normally arrive until 10 because of "traffic" (??? Really? You can't plan ahead for something like that?), but if they hadn't shown up by 10:30 to call back. I had to leave to go to book club (what will I ever do without my maid to hang around the house so I don't have to?), but they did eventually show up around 10:30. When I got back at 12:15 they were just starting their hour long lunch break.

Can you see the smoke coming out of my ears?

Oh, Brazil, there are some things I just won't miss.

So, now they are working again until, I dunno, 3:30-4ish? They'll put in a hefty four-hour work day.

Anyway, I wanted you all to get a look at, and say goodbye to, the worst car we've ever owned: 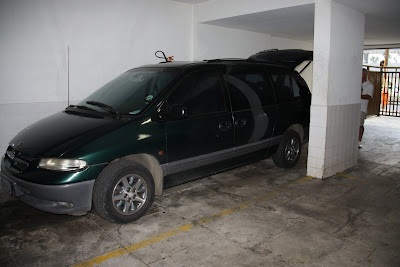 We bought it when we arrived here from the guy who was in Guapo's position before him. Over the three years I don't know how many thousands of dollars we put into it and then we sold it for a whopping 40% of what we paid for it. In it's final months with us, whenever we were stopped at a traffic light you would have sworn you were sitting in one of those massage chairs because it vibrated so bad. And about once a day during the last week, the fuse that was over the air conditioning and turn signals would burn out.

And poor Ballerina Girl's driver bought it. Oh well, he'll probably sell it for parts and do pretty well. Whatever, as long as it's not my problem anymore.

Here are me and Sergio the driver spending our final moments with the van: 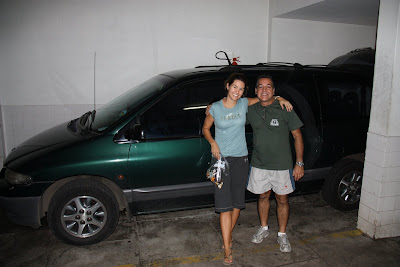 I just love how sad you look! And can I say that your husband and my husband sound somewhat similar with organizational skills. I've learned to let him have a few chaos places like his side of the bed and the top of the Fridge but it still drives me crazy. He has several 'Boxes of Crap' in the basement. If he can't find something my first response is, 'I didn't throw it away, I promise.' He knows I routinely go throw things and throw away things!

All these pictures of your house/garage/neighborhood lately are making me want to come back to visit so much, but even if we did you wouldn't be there! I will always have a little spot for Rio in my heart--we loved visiting last year:)

ah, my friend...you ARE TOTALLY IRREPLACEABLE
I have so much fun with you and will miss you so much...
agh, here come the tears again....

hahaha, how appropriate: the word verification is:
gashead

You look absolutely crushed. So sad.

Good luck with everything!

Nothing to do? What does THAT feel like? :-) You've earned a break after all that organizing you did for the movers!

Your picture makes me sad.

I have read a few horror stories about Brazilian laws. After all the problems you had with la muchacha, I bet you won't miss those either.

The car we drove in Costa Rica would spontaneously start honking its horn.

I am awestruck at the level of organization!! You look pretty darn happy!!! Good luck on the move!!! We'll be anxious to see you.

Wow I know who to call if we ever decide to move!
Good luck with the big move!

I hope they packed everything up and you are enjoying an icy Guarana before you leave ; )