It has been almost 3 weeks since I last blogged. I know I'm not the most faithful blogger, but 3 weeks without the excuse of pregnancy or summer vacation? Come on!

The End of Fall Soccer

Soccer kept things hopping this fall-4 practices on three different weeknights and then 2 or 3 games every Saturday for 7 weeks. Whew. I was pretty much burned out after week 2. Julio's poor team, who went defeated until their last game, finally posted a "W" and Julio scored the winning goal. Man, that was one bad team. Julio is currently OBSESSED with playing tackle football next fall (gee, I can't imagine why he's not interested in soccer anymore). I've only got 9 months to talk him out of it-any ideas?

Juan Carlos's team won every game but their first one, and then lost the last game. :( He made a lot of improvement during the year and had fun so I imagine he'll play again next year.

First time I've ever got one-after getting the flu a couple of years ago I'll do whatever I can to prevent it. It didn't even hurt.

Oh, and I've realized that Coloradans, at least where we live, are crazy about dogs. Remember how I always talked about how much Brazilians loved kids and babies? Well, that's how the people are here about their dogs. People could care less about my kids, but everyone's all talkative and friendly if I'm out and about with Quakey (yes, his name has evolved into Quakey which is much easier because we don't have to explain why we named our dog "underwear" in Portuguese).

His latest naughty trick was getting in to Juan Carlos's backpack, removing a full chocolate milk box and then ripping it apart on our bedroom carpet. Not good.

Margarita has succumbed to peer pressure and started dressing like a girl. No more Nike t-shirts, plaid shorts and flip-flops. She is wearing cute skinny jeans, blouses and even an occasional scarf! The bad thing is is that she has the wrong mom for help with fashion advice. And, she has the same affinity for black, grey and white that I do-so our closets are looking pretty similar these days.

After 10 years of living in cities nicknamed "The City of Eternal Spring" (or worse, Small Town, Mexico which I nicknamed, "The City Whose Weather Most Resembles That of H@#$"), I am LOVING fall. The leaves, the crisp air, the pumpkins. You'd think I'd have taken a million photos of all of my favorite local trees, but no, I've been too busy with soccer, student teacher conferences (Pedro is one of his teacher's favorite kids ever-and she's been teaching for 20 years-wow!), piano lessons (I was the oldest student by a good 20 years to play at my teacher's Halloween recital last week-won't be doing that again!), cub scouts, and all the other random activities that come up to preserve the lovely memories.

But, I have loved it all the same.

That's about it. See? I told you, pretty boring. But, boring is good sometimes.

A crush, a fox, and a storm

We went to the mountains for an overnighter on Friday.

We have made some friends here who are willing to travel with us-dog and all (at least they were last week, who knows about this week). It is the family of Pedro's "crush", a word that the older kids tried to teach him. I don't think he gets it; although they got him to say that he has two crushes, one on the darling little girl below and one on Margarita (awwwww-so cute), I also heard him say, "I have a crush right here in my mouth!" 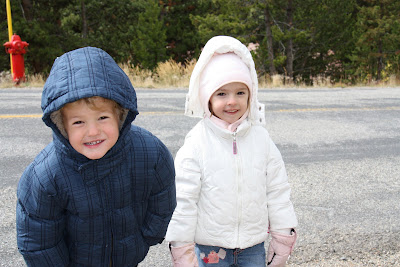 Yep, he's still got that bad smile thing going on.

They're pretty funny together, always laughing and chasing each other around. We've heard her say on several occasions, while giggling and batting her eye lashes "Oh, Pedro, you're so funny!"

And here's a fox that was outside our back door: 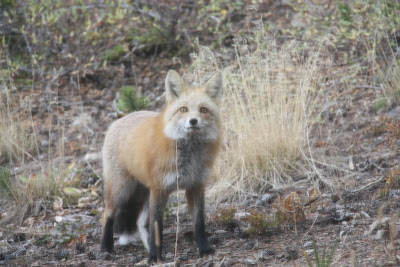 He had his full winter coat and his tail was beautiful-I wanted to wrap it around my neck (please don't tell PETA).

While I had envisioned a day of being out of doors hiking, I way overestimated the temperature (my running clothes consisted of shorts and a t-shirt-no running for me); it was a balmy 28 when we got up and stayed in the 30's most of the day-so much for fall in the mountains.

In the afternoon we had a special treat: a snowstorm that lasted about a half an hour. 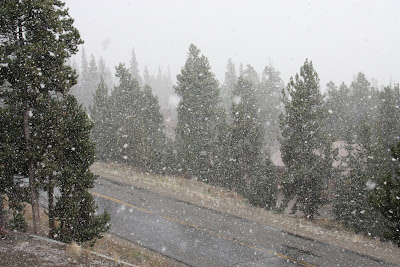 And now I'm ready to face another week of the rat-race.

Have a good one.

When we announced we were getting a puppy the majority of the responses had something to do with how having a puppy is akin to having a newborn again.

No, having a puppy is much closer to having a very rambunctious, very naked, biting two year old than a peaceful, immobile, newborn.

That said, we're having fun with little Cuecas. And whoever dreamt up crate training was an absolute genius. We can leave the house without worrying about what kind of mess we'll come home to and he sleeps through the night in it (which makes him a bit easier than a newborn-but only in that regard).

We've decided, while we're at it, we might as well crate train Pedro, since it's working so well with the dog. He's taken quite well to it: 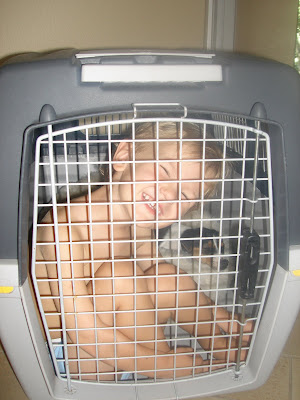 Like babies, puppies are super cute when they're asleep. Here's Cuecas with his favorite shoe to hoard-my fuzzy crocs: 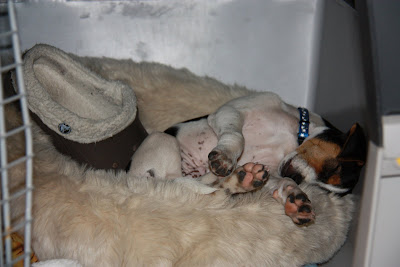 Here we are taking a walk last weekend with the dog-everyone fought for their turn to walk him. 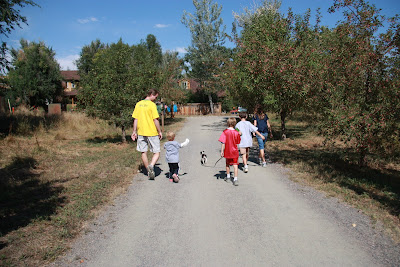 He's just a little guy, so he gets tired out easily: 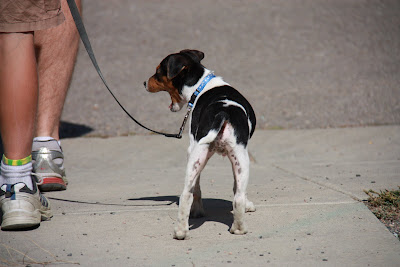 Anyone want to babysit over Thanksgiving?