My Attempt to Stop Time

I know. It's been the Pedro Show around here lately.

I'm having a bit of a mid-life crisis-my baby turned one and now my oldest is about to turn 10. How am I old enough to have a kid in the double digits? I'm still like 24-right???

In an attempt to capture this moment in time I will share with you what Pedro is like right now. 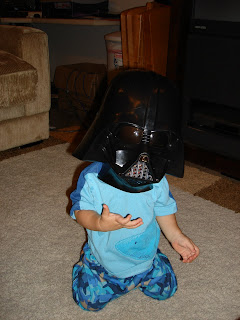 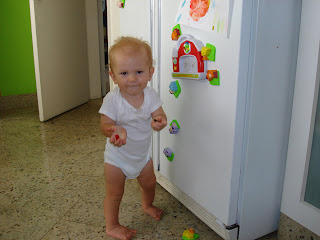 I don't want him to grow up. How can I stop this from happening???

Labels: If I dont' blog about it I'll forget it, Pedro

Oh, cute! This is so sweet. I don't mind the Pedro fest at all. I can just picture him dancing and swimming! I think I want a Pedro, too! I'll have to tell J. I mean, "El Jefe." (When he heard that your husband gets to be "El Guapo," he decided that he wanted a cool name too.)

Problem is, I don't think J and I can make babies like that.

You're going to think I'm copying you because I have a very similar post drafted but haven't finished it yet. :)
Pedro and Justin are so much alike, it's weird!
p.s. We'll be in Utah at the beginning of July. :(
It would have been cool to see you guys 10 years later...

Awwww...great pictures! He looks like a lot of fun. (If you find out how to keep them from growing up, let me know...I never wanted my babies to stay babies, but I absolutely adore my 8, 10 and 12-year-olds now, and I do wish THEY would stay as they are!)

Gabs
Cute fotos of Pedro. We really need to get together so that I can just give him a hug! Imagine him with the pizza now!
Let's splash at the pool together soon!
BG

I know I gotta get over my stereotyping, but it's so funny for me to see pictures of a blonde, fair child called Pedro. He is one cute little man. I want him to come over for a playdate!

And as soon as you figure out how to stop time, let me know. I spent my oldest's babyhood making him learn and grow and I'm spending my thrid's babyhood just trying to cuddle him hard enough that he will just STOP getting bigger. It doesn't work.

And my husband is also feraking out about the baby wanting thing...

When you figure out how to stop time, be sure to let me know, k?

Pedro is a cutie!

Awww, so sweet. I felt the same way about my youngest, she is now one month shy of three and I know I still treat her like a baby. That is amazing that he doesn't mind putting his head underwater. Keep that up!

That bidet takes me back, I think Calandria and I were the only people in Central Maine who had one of those in our house. Our friends always used to turn it on and watch the water hit the ceiling, my mother got so frustrated with that! Cute pics.
ave

I've been wondering how to stop mine from growing up any more as well.

My oldest will be 10 tomorrow, and I've wondered the same thing; how can I be old enough to have a kid in the double digits?

Pedro is such a cutie! I love the bidget picture!

Pedro is just the cutest! And I know how you feel about having an adorable one year-old and wanting a whole bunch more just like that one!

I soooooooooooooo can relate. Everytime I say to dentist husband, "She can't be our last" he looks at me like I am insane.

I can relate too my son is now 6 and I still call him my baby,the other day at the store I saw mom with a newborn and my heart ache for another one, but I am in an ealier menopause bleive it or not have not..I haven't had a period for 13mos. its kind of sad I love it when I was pregnant with Franciso and he want's a bother or a sister so bad,
Gabs, enjoy everthing b/c they do grow up so fast I had my daughter at age 21 and now she is 25 and I can't remember a thing only that I fuss to much with her hair untangling it an all and I always had a ribbon in my prurse or a doll,
now I have a super hero or a car,,
life is funny that way,when I don't have my son I don't know what to do ,,
Just take your time with Pedro enjoy every thing b/c soon you know the will be off and running.
And at least your still 24 and can have more LOL!!!marina

ITA with Nikko.
What a cutie! And what a happy and busy little guy he is :D

It is a sad fact that you can not slow down time.

I remember when my oldest was 9 and the baby was 9 months, I commanded everyone to "FREEZE! Right where you are, all of you stop growing...right now." I thought they were perfect just as they were.

But this is pretty good too. My baby girl is having a baby girl (and grandma-hood is the GREATEST!)

Enjoy every step along the way. Your kids are all wonderful...sure wish I could see them in person.

Pedro sounds like my Eleanor. If only all of the babies could be so good! Very cute pictures of him!

so sweet! i cannot believe how fast they grow! he is a cutie! seeing the swimming pictures makes me soooo excited for summer!