I can't believe it's already been 10 days. We've had a great time in Colorado and we are headed to Utah in about 15 minutes for the second part of our trip. Here are the highlights of our trip so far:

(This picture was taken minutes after arriving at my parent's house) Pedro, obviously feeling very comfortable in his new surroundings, got right on making a mess of my mom's bathroom: 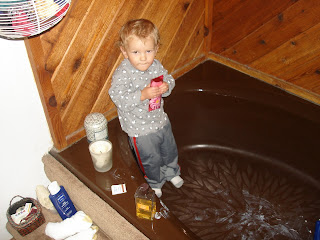 They ended up putting up a gate to keep Pedro out of the bathroom.

We got to pick out a real tree this year (Guapo's dream): 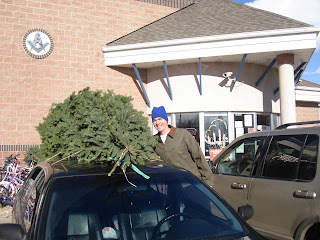 Although we were hoping for a white Christmas, it only snowed for about 5 minutes one day. I don't even think you can see the snow falling in this picture, but I promise it was: 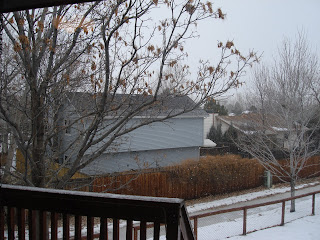 We went to a Nuggets game in my dad's office's fancy-shmancy box. They were giving out free reindeer webkinz to all kids and the Nuggets won-so it was pretty much a great night for all involved: 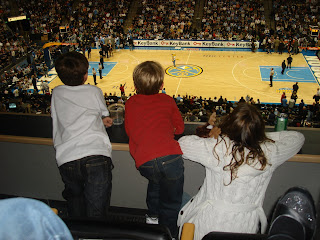 They climbed the wall at the mall: 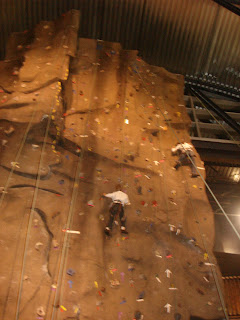 They got to make fudge and cookies with grandma (I can't tell you what a treat it was NOT to be in charge of these activities!): 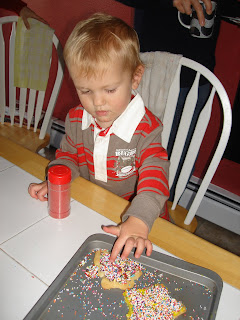 (of course, no one wanted to eat Pedro's creations). 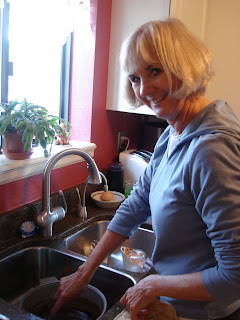 The one bad part of the week (and it turned out ok in the end) was that on Christmas Eve day we lost Juan Carlos and Julio for about an hour and a half. Unbeknownst to any adults in the house, they had gone over to a neighbor's to play and were in the basement where no one could here our repeated knocks, so we assumed the neighbors were gone. We frantically searched the nearby park and pond; finally, worrying (well, more like hoping at that moment) that maybe they got lost and wouldn't know the address or phone number of my parents' house, we called the police and they started searching. I'm pretty sure it was the worst hour and a half of my life. I felt like I was suffocating, about to throw up, and pass out all at the same time.

Guapo kept returning to the neighbor's with no luck; then he just felt like he should go inside, so he just opened the front door and he saw their shoes by the stairs (after, the officer joked that he was going to have to charge him with trespassing). They were fine and had no idea they had caused all of us such grief. The nice policeman in charge of the search talked to them about always telling someone where they are and he gave them a sticker: 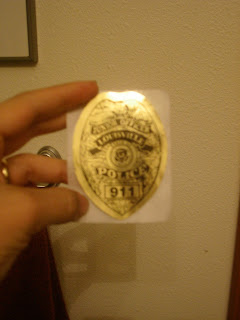 What an ordeal! I so thankful am it ended happy. The experience served as a very strong reminder of what is really important in life.

That night we did our traditional steamy fondue with the family: 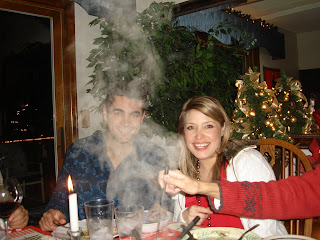 ...and later that night Santa visited the house: 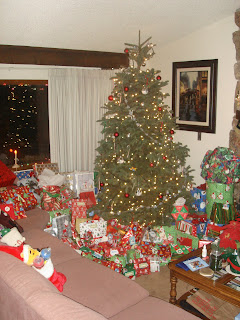 We finally joined the 21st century and got a Wii for Christmas. I am a staunch opponent of video games-we'll see how long before I regret the decision. Speaking of the which, please let me know if you can recommend any good, ACTIVE, games for the kids.

And, Guapo and I got a "grown-up" camera. So hopefully the quality of our photos will improve (I'm still scared to use it-so I've got nothing to show you yet.).

I hope you all had a wonderful Christmas holiday!

I hope you had a safe trip to Utah... And I cannot even imagine the worries and grief with the 2 boys at lost. I am glad everything turned out fine!!!

I lost toothsome #3 for about 5 minutes a week ago and it about killed me. I can't imagine an HOUR AND 1/2! Holy crap.

what a scare you had. glad everything was fine. i am happy you were able to spend time with family for christmas. thanks for sharing.

I did something similar to my parents when I was a kid. I had no idea how scary it was for them but now that I am a mom I totally understand. I am glad they were found safe.

Too funny that Pedro found trouble not long after arrival.

You have done a lot of fun activities. The climbing wall is impressive!

I can't imagine how you felt as you were searching for Juan Carlos and Julio. I am so glad it turned out okay in the end!

I would love to get a really nice camera in the near future. Enjoy yours!

How scary! I have had two of my children temporarily misplaced, but not at the same time, and not for as long. Both times were terrifying though. One was my 4 year old at the beach in La Jolla CA, and the other was during summer games in Cedar City at a park- my 2 year old, who couldn't even talk. Just about the worst moments of my life.

Have fun in Utah- We deffinately had a white Christmas here.

I would have been throwing up, I'm sure. An hour and a half? Ack!

Santa brought us a Wii, too. So far, it's fun and we haven't had too many issues. We've played a lot of sports and the kids got a Mario game.

A grown up camera? Can't wait to see!

How scary about the boys getting lost! I've had that awful feeling you describe before too, but never for an hour and a half. Glad everything was okay.

I find the Wii very annoying and I'm always giving lectures about it. I do get a lot of leverage out of it, though. Chores get done quickly and thoroughly (er, after I make them go back three times to finish things off to my standard), books get read, and even outdoor play happens.

Scary. I lost Jackson at Sea World once for about 30 minutes. I basically wanted to die.

I wanted the Wii, Steve wanted the 360. Guess who won? Not me.
Video games are not bad. Our kids get into them for a couple of weeks when we get a new game (not often) and then they get bored and quit playing.

Hi, Gabriela! Thanks for the great Colorado update. I'll bring MY kids next time, and your mom can entertain ALL of us! :)

I lost Kara for 20 minutes in Toys R Us and had them lock the doors, just knowing each minute that passed she was miles further away with some psycho person. Ick.

I know that sick-want-to-throw-up feeling when you think you've lost a kid. It's horrible.

It was GREAT to see you in Boulder, Colo. and to get to teach nice cute Julio in Primary. So scary about loosing the boys.

Glad to see you at the Nuggets game. Who did you get to babysit?
There never seems to be enough time to chat scurrying at Church.

the sports games are good for the WII....mine love them and they can be somewhat of a work out...
and for us...grab a WII Fit and we can exercise together and keep track of each other!
can't wait to see you! miss you!
BG