What I've Been Up To.

Well, I've been back for just about a week. What have I been doing other than sweating, you ask?

When I was in college I would get so worked up over finals that as soon as I was done and let myself relax, I would get sick.

That trip last week? At least as stressful as finals. So, when I arrived Thursday and got in bed, I pretty much didn't get up for three days. By Saturday night, I realized it felt a lot like the strep infection I had about 5 years ago; you know-the totally raw throat, the fever, the dreams about your 31 year old brother-in-law hunting gnomes for some kind of boyscout certification (yes, you Arnold). Being in Latin America where you can buy pretty much whatever you want at the pharmacy without a prescription, I began to self-medicate myself with amoxicillin.

My kids are STILL out of school. Until Monday. The Wii is coming in handy when it rains. Other than that, we've been swimming a couple of times and had some play dates. The beach is TOO crowded right now for my liking and will be until after Carnaval in the end of February.

I don't care what your politics are, yesterday was a pretty cool day in the history of our country.

For the first time ever, I was stopped in customs and my bags were searched.

I have always felt confident coming in with kids that they would let me pass no matter how many bags I had, simply because I had the kids with me (they love children here). Well, this time, the customs agent looked at me and the kids, smiled and let us by, even after I *vaguely* motioned to my 9 bags that were coming in tow with the nice little man that was helping us through immigration (read: butting us right to the front of any line we approached). So, I left the customs area (I was chasing 4 kids after a 24 hour ordeal). When our friend didn't join us momentarily, I knew I was in trouble. After chastising me for leaving my bags (to which I pointed out my 4 kids), they let me re-enter the customs area where I saw my poor bags, lined up in a row, ready to be searched. :(

You are not allowed to bring any product related to cows into Brazil. I know this. But, I love cheddar cheese. Real, American cheddar cheese. So, I took my chances, knowing it was going to be me with the 4 kids going through customs. 15 pounds of cheddar spread out in 6 different suitcases.

As my heart raced and my palms sweat, he missed the first one. (Yay!!!!)

He quickly found the second and told me it wasn't allowed, to which I gave him the, "Really???????-but-look-how-sad-my-eyes-look" look. He gave me the "stupid-gringo-my-job-is-so-lame" look and shoved it back in my bag. He then proceeded to find my entire stash, and since I had distributed it as such, it was quite obvious that I had been aware of the rule. But, the nice man let me keep all my cheese and all my other food too!

I gave him a smile and the thumbs up and left the airport with my 15 pounds.

Dealing with the Staff

I think 2 maids and a driver constitute a staff, don't you?

I had a new maid start yesterday.

The pregnant maid situation has continued to steadily deteriorate- Ohhhh, I have stories I could have blogged about, but 1) I always feel guilty afterward and 2) unless you've been through the maid situation, I'm sure after a while it's like, "OK girl with a maid, we're sick of hearing about your 'problems'".

She's going to go on leave pretty soon anyway, so I am starting her replacement a little early.

This woman is a cleaner. She has been scrubbing the walls and the floors and the corners. And she's fast-sometimes you can get a good cleaner but they take like 2 hours to do one bathroom. Not this lady-she's a speed cleaner. And she cooks 4 nights a week for me.

So Vanessa now basically has to do noth-ing. But I prefer that to paying her for sitting at her house doing nothing which is what I'm sure she'd prefer. Today was their first day together. Oddly enough (hear my sarcasm here, people)-it didn't seem to really bother her that someone else was here to do her job. She was perfectly happy today to putts around watching Super-Cleaner do her thing.

My sister-in-law found out she's having a little boy. So, it's time to obsess over another quilt. (Don't worry, I will reach my quilting-limit soon and take another 3 year hiatus-that's just what I do)

Here are the squares that Margarita and I got done tonight (Guapo's out of town so we could work all night without guilt): 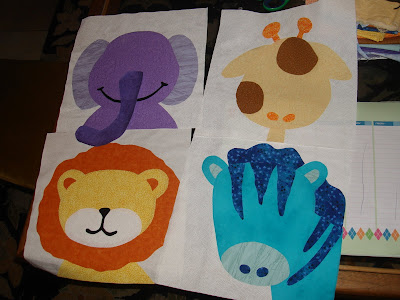 Aren't they sooooo cute??? (Yes, they will have eyes eventually. They will not be blind animals)

And, that's about it.

Those squares are SO cute! I love it!!

Hope you get to feeling better soon!

How are you so good at quilting?! Be careful, I'm getting high hopes for my first baby's bedding;) I'm impressed with Margarita for helping too.

Sorry you got strep; it's the worst, but I'm glad you made it home with your cheese!

Those are some of the cutest squares ever! Are you following a pattern or did you just make those up?

Congrats on the customs! And I don't think we mind the maid stories- they are very entertaining.

wow, you have been a busy girl!
such a cute quilt...you are going to be tired out for ours!
yay for cheddar cheese and super nice customs man! I haven't been stopped yet here, but was ALWAYS stopped in Venezuela because they check EVERYONE'S bag NO MATTER WAHT!
hope you are feeling better...
and can I come and watch Vanessa squirm? oops, sorry, didn't mean to be so mean! yea for super fast maid!
looking forward to seeing you!
BG

Wow, what a couple of weeks for you! I'm tired, just reading about it. I'm smiling at the cheese story, and extremely happy you got a clean maid (you're paying double--may as well have one do the work of 2, right...sigh...)

But the best line was an "aha" moment for me: that you reach your limit of something, and then take a 3-year hiatus. I DO THAT! YES!! I wonder why I loved something so much, and now it doesn't bring me the joy it used to. So I take a long break.

Love the quilt squares. I have 2 in the works but CANNOT find time to finish them lately.

I would do pretty much anything for cheese too. :)

That is a lot! I'm glad you are feeling better and you were able to get the medicine you needed quickly. That would be nice!

I'm so glad you were able to keep all of your cheese and other food. :-)

Yay for hiring a new maid who actually cleans well and cooks, too! I bet you enjoy what she cooks. :-)

I was just thinking today that I'd love someone to come clean my house--deep clean it. Get into all the places I don't, like the really tall windows. Love the quilt squares--they're adorable.

Well played with all that cheese, you little cheese smuggler! :D

Self-medicating is really weird, like I used to totally do it...and now I think I'd be afraid to prescribe meds for myself.
I'm glad you got over that.

So, what do you make with your cheese?

But haven't you always wanted a staff? hee hee

I'm glad you got away with the cheddar cheese. I could never be separated from my cheddar. Yet another thing we have in common.

That quilt is gorgeous!

Abby: I will totally make you a quilt when you have a baby!

Head Nurse: it's a pattern. I'm changing it up a bit, but not the animal parts.

NCS: I dont' do anything with the cheese really. You know, grilled cheese, slices of cheese, cubes of cheese. Mainly it just makes me feel good to know it's in the fridge. :)

The squares look perfect and gorgeous....
I am glad you recovered it well and I am too having maid problems on my own.....

If I could get paid to hunt gnomes, that is all I would do. Nasty little buggers...