I just wanted to take a minute to honor a few of my favorite men in the world (a day late thanks to Blogger, Flickr, and/or my internet connection).

First off, my dad. I think he knows how much I love him. Everyone who meets my dad likes him. He makes friends with EVERYONE, which as a child was embarrassing, but now I think it is pretty cool. Here he was in Italy last year making a friend with some French guy. They didn't speak each other's language (the hand gestures were classic), but by the time the boat ride was over, they were hugging goodbye. Here we are when I was a little girl (notice the cool denim suit. My dad was cool.). And here he is with my little girl more than 8 years ago. He and my mom drove from Colorado to Utah as soon as I called to tell them I was in labor. They did the normally 8 hour drive in 5 1/2 hours and made it for her birth which was so special for me since it was our first baby and their first grandchild.

What is even sweeter is that he drove back the very next weekend to see her again!

And then there's my husband, Guapo, who doesn't like to be "blogged" about much. But, I'll have you know that he is one great dad to our three kids. I am so lucky I married someone who puts his family first. He plays with the kids until they are sweaty and have red little faces.

Here he is teaching Margarita and Julio how to ski last winter. No ski school for them! However, Guapo had quite the sore back that night. And last but not least, my father-in-law, who along with my mother-in-law raised Guapo to be the man he is today. He has earned the admiration of all of his family for standing up for what he knows to be right. Recently he and my mother-in-law finished a three year mission for our church in Guatemala. When they received the call, my father-in-law retired from his very successeful career as a judge, packed up their stuff, sold their house and spent three years working tirelessly in Guatemala. What an example for his kids and grandkids! 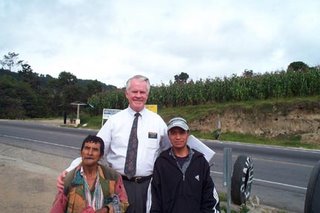 Gabriela, they all sound so wonderful. We are so lucky to have great men in our lives. Happy late Father's Day!!

Fabulous pictures... love the shots of you and your Dad. :)

don't you love great men!we're so much better for knowing them!

We agree that Guapo is a great dad. Looking forward to total mayhem when our 6 little kids are being chased around by our 2 big boys.

Jules: We can't wait either! There's an outlet mall nearby-maybe we can sneak away! :)

What a sweet post :), your dad (and mom) driving to Utah for the baby's birth, Guapo and you dad-in-law...viva viva for dads!, they really don't get enough compliments.

I LOVED the picture of you and your Dad. And I have to agree - from my observations that Guapo is very good at the Dad thing. Have fun with Jules. I'll miss seeing you both.

You are so lucky to have such wonderful men in your life.

That picture with your dad is precious.

Made me cry and go tell Chris how much I appreciate him. Thanks for the reminder.

What a great blog! Made me feel bad I didn't think to blog about the men in my life. Great pictures to go with the wonderful complements of the men in your life. !Felicitaciones!