Friends are critical to the life of an expat. You leave your country, family, friends, everything you know behind and move to some foreign country and try to make it work for your family. Your local friends become your family and support system. It is amazing how quickly you can make friends as an expat; everyone needs friends, so most people are super friendly. There's no, "Well, she seems cool, but we'll see. Maybe next month I'll invite her over for a playdate". Nope. It's all about the here and now. And a lot of the friends you make are friends for life (like my friend Grammy!).

In Small Town it's been difficult to make friends because there aren't a ton of expats as there's only one industry here. In Caracas there were all kinds of embassies, tons of different companies, etc. etc. Here it is all oil, all the time. And, there is no international school. So, most companies don't send American or European families with kids here. Guapo's company is, hmmm, let's say special in that way.

My friend, who comments on every post I write as "K-Squared's Mom" arrived last fall. She came at a dark point in my stay here in Small Town when my only friend was leaving with practically all of my kids' friends (she had triplets). Sometimes in my blog I think I make Small Town sound pretty good, but really, it can be a pretty hard place to live. Don't get me wrong, I love my life and wouldn't trade it for the world, but it is not all boat rides and monkeys. And the shrimp can only keep the kids occupied for so long.

The turnover here is incredible because people just can't take it. Even Latins. Even Mexicans. There are 12 houses in our housing compound; of the 12, only two haven't changed renters since we arrived 2 years ago. Several have changed hands 4 times. We have more than one marriage break up due to Small Town living. Not good.

Anyway, K-Squared's Mom arrived, and on her first night here we went to dinner. As we got out of the car, two of my kids and her two kids started holding hands and I knew then and there I had myself a new friend. She has been such a blessing in my life. She is one of those "beautiful on the outside and the inside" kind of people.

She has taught me much about the beauty and grace of her Filipino culture. It shines through in all she does. She is kind and generous to all she meets. Her home is her refuge from the world, and in so being is decorated with love and always has fresh flowers. Whenever I go to her house for a mid-morning playdate, she has prepared an entire meal for us. She is a wonderful, loving mom to her two kids. I could go on and on, but I'm afraid I will soak my keyboard with tears. Of all the things about Small Town and all the people whom I have met, I will miss her the most of all.

To give you an example of just how cool she is, she had a Harry Potter party for the kids on Saturday. It wasn't anyone's birthday, she just did it so the kids could have a fun activity (fun activities are hard to come by here in Small Town).

The kids received super cute invitations telling them they had been accepted at Hogwarts and they were to report Saturday night to Hogwarts (which was being disguised as a Muggle house). 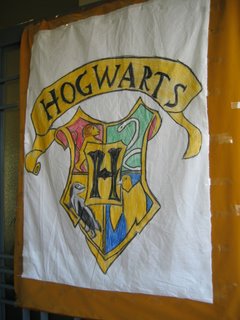 They arrived and had to go to Gringott's Bank to take out money so they could visit Diagon Alley to purchase various school supplies. (She made the wands and the bags for the wands. Such projects require hours of searching for supplies here in Small Town): 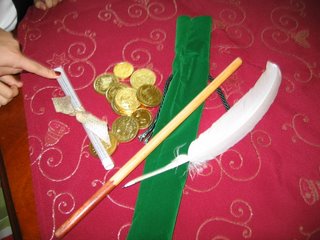 The kids then had to be sorted in to their houses (a cell phone was hidden in the hat and annouced (on speaker phone) which house each child was in): 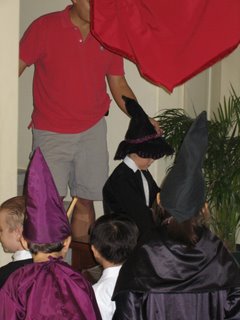 Then it was off to their first class: Defense against the Dark Arts where practiced some spells and then had to fight off a Dementor (played by K-squared's mom's husband who also played Professor Snape and "Dumbledad". What a great sport!) 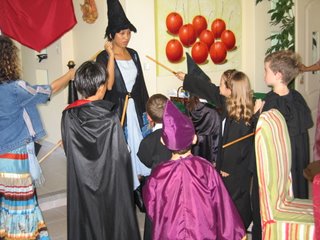 Next they had Potions with Professor Snape where they made some Poly Juice Potion: 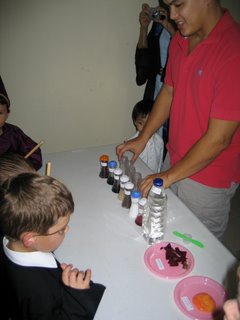 Then they had a feast (the house-elves were on strike so the kids had Domino's and Kentucky Fried). After dinner they had a little time to chill out in the Gryffindor Common Room. Then they had to find the snitches. 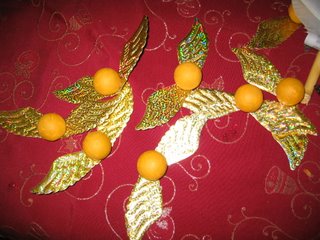 To finish off the night they had a trip to Hogsmead to spend the last of their Galleons on treats.

Here's one last shot of my little Juan Carlos (3 yrs) posing as "Drakin" Malfoy as he calls himself. 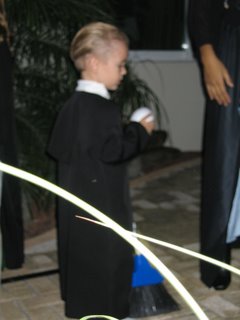 The kids had a great night! My hat's off to K-squared's mom! Thanks for being such a great friend. I will miss you dearly.

You truly are a brave woman (and not just because you swim in cenotes): to go with Guapo to different places, leaving your friends, family, real showers and comfort zone.

K-Squared's Mom sounds like an awesome friend, her kids and yours holding hands the first day, made in heaven. Awwww, that was a cool story :)

So you are moving from Small Town to Colossal Mexico City, wow! That’s a huge change. I’m hoping you’ll keep us posted on everything, otherwise, how can I continue to stalk you if you don’t tell me what happening with all of you?

That sounds like such a cool party. I admire your bravery in small town...I'm from a big city and I don't know what I'd do with myself if I wasn't here...

Smart Mama: I LOVE the expat life. I think the benefits far out weigh the hard times. I would recommend it to most people.

No Cool Story: I for sure will keep you updated.

Evarob: we are big city people too, that's part of the problem here.

Right back at you, Gabriela. I am doubly blessed not only with your friendship but also with your inspiring way of parenting and service to others. Life here in Small Town will be so dull without you guys around. My kids and I will have a tough time adjusting without our best friends!

But you're right. Expat life is tough but definitely exciting; made all the more worthwhile by the friends you meet and keep.

That is the coolest thing!!! How totally fun! We are looking into The Department of Defense schools for our international adventures.

What a wonderful friend! That party was an amazing feat. What fun for the kids. I am sure she is dreading your upcoming move, but you are probably right. You will be friends for life!

Sounds like you guys have a great friendship. It's so hard when one of you moves away. One of my friend's moved, but we keep in touch, and when we talk or get together it's like no time at all has passed. I'm sure it will be that way for you too.

The party looked so fun. My kids would've absolutely loved it. They are HP fans, and so am I.

K-squared's mom sounds like an answer to a prayer. Friends like that are hard to come by where ever you are.

I would love to live abroad. I love reading about your adventures.

wow, what an awesome party, and a great friend. We can all use friends like that in our lives.

That is so cool!! I want to have a Harry Potter party!! The planning astounds me!! THat is just so aweome, I'm sure your kids loved it!!

txmommy: expat is short for expatriate which is someone living/working temporarily out of their own country.

My husband and I are looking at overseas options in a year or two, when our boys are a tiny bit older. I'm hoping that I can be as brave at putting myself out there an making friends right off the bat like you are. (Starting a blog was HUGE for me, and I don't even have to talk face to face with people to do it.) I wish you the best with your move.

And K-Squared's mom, you rock!

big handclap to K-Squared's Mom! as a transplant from one state to another with no family within 2 hours, it was a huge change for my husband and I to start our marriage on our own. Our church has become our family, and it made all the difference.

I remember how much my ex-pat life improved when you became my friend. I will be forever grateful.

I am so glad that you've had K-squared's Mom to make a bright spot in small town. She sounds completely AMAZING! And that party - WOW! I love people who love children and do what they can t make their lives special.She's a keeper, for sure!

I LOVE that party! I too have a friend from the phillipines, she has moved to another state but I absolutely adore her....perhaps it's the culture they grew up in because she is much the same....very hospitable and just the happiest person I know!

What a fantastic party!!
Your friend sounds amazing. I hope you'll always be friends, because I'd love to meet her someday.

A Harry Potter party ! How fun! My 10-year-old would be jealous. She is a fanatic.

Good friends are hard to find especially when you move. I just moved to Apple Valley 9 months ago and have yet to find that great friend. The church is nice, but who can make friends when you are rushing to Sunbeams?

You have been a pseudo-friend to me. Thanks for opening your life up on the Web.

Back in the computer world again! I loved your story on K-squared's mom since I had the privilege to meet and spend time with her. I knew the minute I met her that she was a special one. I even got to experience one of her fun b-day parties & fine hospitality. She's a great lady and wonderful mother.

Wow what a great person your friend is...I'm going to have to save her party ideas for future use!