Not So Best of Small Town-Filth and Muck 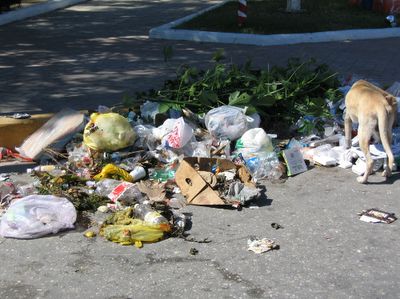 When we arrived here in Small Town it was quite a shock to the ol' system. I used to attempt to run outside with Guapo before we got the treadmill and we would count how many times we would dry-heave during a run. The smells could kill you. If I were pregnant here I would have to confine myself to my house. Make that, in my house in front of a fan, as sometimes the bad smells just waft in, uninvited.

Sadly, we are used to it now.

In the States, I can remember every now and then seeing red as someone would throw a cigarette out of their car window. Now, on a daily basis, I see people hucking all sorts of stuff out of their cars. Hamburger wrappers, soda cans, biggie drink cups, dirty diapers. Whatever. Not to mention the men that just relieve themselves on the street. It is so disturbing. It's not as if they don't have trash cans (or toilets). I've seen them.

Small Town could be a pretty place; it is a fairly lush, jungly sort of terrain with some decent beaches; but, in order to use the beaches you would have to clear a spot of trash to lay your towel down. And who knows what you'd find out in the water. Ewww. I shudder at the thought.

This is not a generalization against Mexicans. I have been to plenty of different parts of Mexico; nowhere compares to Small Town when it comes to grossness. Mexicans that are not from here are just as disgusted as we are.

On the upside, though, it's an election year here in Mexico and the incumbent party does tons of improvements before the election to gently "remind" the people how great their party is. So right now, as I write this, Small Town is teaming with trash trucks and street cleaners. I'm not kidding, like one in every 10 cars is a trash truck. Traffic problems galore. And in our two years here, I have never once seen a street cleaner; the average Jose-on-the-street probably doesn't have a clue as to what it is. 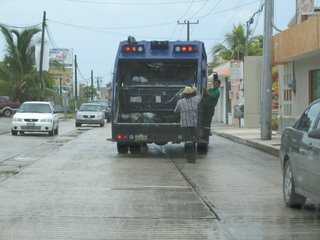 I have to say, it looks much, much better. There is still trash all over the place, but it's not piled up so much. Just a nice single layer. It would still look dirty to your average tourist, but for Small Town, it is squeaky clean. For those of you were thinking of visiting, I'd book soon, before the July elections.

I've been wondering about that. I think I've seen garbage trucks galore in the past couple of weeks! Hurray for elections!

you could jog with a cinnamon stick up each nostril.

Guatemala was exactly the same. I can't smell diesel exhaust now without absolutely gagging!! Right after we got to G we left the airport, and there was someone peeing on the side of the road. And dirt everywhere (of course it didn't help that a volcano had been blowing ash for days before we got there). We went on some scenic bus rides while we were there and there would be beautiful scenery, and then you would look down, and there would be trash everywhere. Very disgusting!

It's so sad to see people treat the earth that way. Maybe the elections will help.

But really, I have had this talk with my children, about what to expect in Mexico and the like: the mentality is just different; such a beautiful place, but people have to take care of it, all else, you'll see the "yellow dog" among the trash bags.
I guess Elections in Mexico can have some good things.

I'm seriously thinking about going to Mexico (I haven't in 12 years...I'm scared of the bandidos), reading your blog helps me a ton.

I am so sorry Gabriela. I don't, and probably never will, understand why people don't take pride of community.

Bejing was terrible too. We stepped off the plane and were about knocked over. There were no words to how bad it was. Dirty bodies, unclean clothes, thick diesel air, rotten food, rotten trash. Just walking from the front of our hotel to the Haggen Daas (sp?) shop next door made under my fingernails dirty.

I remember coming home from a time overseas and thinking how CLEAN everything was. And in America we have CURBS and SIDEWALKS, not to mention street cleaners and garbage collectors...It is entirely mind-boggling that people don't think twice about tossing whatever wherever...I could SMELL that first picture of your post. Ew, ew, ew.

Tess: you deliver once again!

NCS: You should come back to good ol' Me-xi-co. From what I've heard from Guapo Veracruz is practically like the States.

Steph: Bejing? Awesome. Curious as to why. (Another post for me?)

Lol, Tess! Yikes... it's so hard to see our earth become polluted by mere carelessness.

I can smell the stank from here..you're a brave woman.

How funny about a tooth mouse, I didn't know that.

But do they keep the giant shrimp shiney and clean? They've got to have priorities!

I totally remember that from Mexico too. We rode the bus a lot (being poor college students) and you'd see fellow passengers chucking garbage out the window as the bus rolled along.

It gave a whole new meaning to the song "The Wheels on the Bus". (The garbage on the bus goes out the window, out the window.......)

Not sure why it is ingrained in our culture to pick up the trash but I'm glad it is! (Probably due to clever ad campaigns such as Give a hoot, don't pollute)

gosh - i can't imagine globe trotting and living in differnt countries - your life is VERY differnent than mine. - sounds cool - except for that garbage. yuck

Reading that brought back memories of when we went to the Marshall Islands to adopt our son.

There is a smell to poverty that is like no other.

Yay for the elections! Hope the cleaness last awhile.

The US is amazing. Somewhere in history someone theorized that eliminating random dumping of garbage on the streets would improve health conditions and overall community pride. Then, they sold that idea to the right people who had the resources to communicate and enforce or maintain a standard of cleanliness. We take all that for granted. Our streets used to be muck in some cities. It blows me away how the US works. I don't think Mexico will ever get there. I think there will always be the Dona of the Casa running through the house yelling "basura" at the sound of a cowbell.

oh the trash can- a great civilizer of man!

I remember this very well from some part of Venezuela. When it got too awful, I would tell myself, "Look up. Look up & while you're at it, hold your breat just a little."